A petition hanging on the door of the building at 361 Indiana Ave. (see image below) urges downtowners to support a social room/Asian grill” called Stixx. 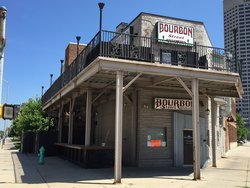 “The owners of Stixx have over 25 years of experience in the restaurant and bar business and will make a great addition to the neighborhood,” reads the petition. It had garnered two signatures as of Wednesday afternoon.

It’s unclear whether Phan Investment Group has purchased the two-story, 4,000-square-foot building. Phan couldn’t be reached for comment. A for-sale listing on the real estate site LoopNet posts an asking price for the property of $990,000.

Bourbon Street had occupied the building for 15 years before closing in January.

• Tacos and Tequila on Main has opened at 1502 Main St. But margaritas won’t be available until Aug. 15, when “formalities” with the liquor license are expected to be work out, according to a Facebook post.

• O’Reilly’s Irish Bar also has opened, at 1552 N. Main St. This is the fourth O’Reilly’s for owner Keith Reilly. The others are in Indianapolis (downtown at 36 S. Pennsylvania St. in the Century Building and at 8923 S. Meridian St.) and in Fort Wayne.

• Books & Brews is set to begin serving beers and grub on Aug. 11 at its third location, at 1551 N. Green St. in Brownsburg, as part of an ongoing expansion.

Jason Wuerful launched the used bookstore and brewpub on Indianapolis’ north-east side in 2014, at 9402 Uptown Drive near Interstate 69 and East 96th Street. A location in Zionsville’s Boone Village Shopping Center followed.

• Metro Diner is expected to open by the end of the month at 302 Dan Jones Road in Plainfield, north of East Main Street near Meijer.

Pre-opening charity events on Aug. 19-20 will benefit the Hendricks Regional Health YMCA and the Trooper Bartram Memorial Foundation supporting Christmas for Kids–Shop with a Cop.

The Plainfield location will be the fifth in the Indianapolis area for the Jacksonville, Florida-based chain. Others are at 2258 W. 86th St. in the North Willow Shopping Center on the city’s northwest side, 3954 E. 82nd St. in Clearwater Crossing, 7225 U.S. 31 on the south side and in the Butler University parking garage.

• Thai Castle (19 E. 126th St. Carmel) is opening a buffet-only location in Keystone Shoppes on East 86th Street across from The Fashion Mall, where Teriyaki Madness had a brief run.

• A Kroger Marketplace has opened at the northwest corner of Southport and Franklin roads in southeastern Marion County. Marketplace stores, which can be as large as 125,000 square feet, are the Cincinnati-based chain’s largest locations.

• A temporary American Girl store opened Saturday at The Fashion Mall at Keystone and will run through Jan. 28.

• Phaya Thai Street Food has opened at 5645 N. Post Road in the area of the former Fort Benjamin Harrison military base.

And a closing to report:

• Winglicious at 2132 E. 62nd St. near North Keystone Avenue has shut its doors.