A men’s clothing store is relocating to East Washington Street downtown not long after another vacated its nearby space. 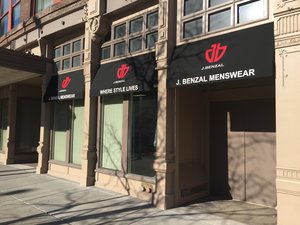 J. Benzal is moving from 739 Massachusetts Ave., where the store has already closed, to 22 E. Washington St. in Victorian Centre near Red’s Barber Shop. The 2,300-square-foot space was last occupied by a ticket broker.

Owner Mamadou “Ben” Diallo told Property Lines that he hopes to open either Friday or Saturday.

J. Benzal will open on the stretch of East Washington between Pennsylvania and Meridian streets, after Jos. A. Bank (10 E. Washington St.) shut its doors in August. The clothier had a  nearly six-year run in the space, which currently is vacant.

Diallo’s suits are made in Italy and designed by him under his J. Benzal brand.

He closed his store on Mass Ave in October after he said the landlord wanted to raise his rent to an amount he couldn’t justify.

“It’s in the heart of downtown,” Diallo said of his new location, “and there’s more traffic.”

He plans to host a grand opening at the end of January.