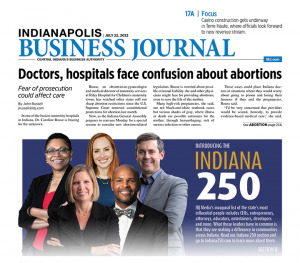 All of the newsgathering publications of IBJ Media have teamed up to produce the Indiana 250, a compendium of the most influential and impactful people in the state’s business, not-for-profit and civic communities. Also in this week’s issue of IBJ, John Russell reports that doctors and hospitals across the state face confusion and anxiety over how anticipated abortion legislation will affect their practices and the care they provide patients. And Mickey Shuey explains how Kite Realty Group Trust’s $2.8 billion merger with a competitor has changed the Indianapolis-based retail real estate company. 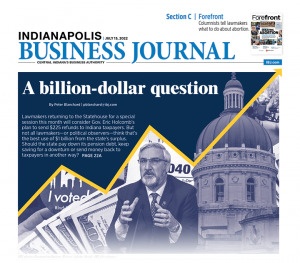 Indiana lawmakers returning the the Statehouse for a special session this month will consider Gov. Eric Holcomb's plan to send $225 refunds to Hoosier taxpayers. But IBJ's Pete Blanchard reports that not all lawmakers—or political observers—think that's the best use of $1 billion from the state surplus. Also in this week's issue, John Russell explores why hospitals, insurers and health clinics are such tempting and vulnerable targets for hackers. And Dave Lindquist has the story of a group of high-profile filmmakers who have created a visual-effects firm in Indianapolis to meet a need they saw in the local market. 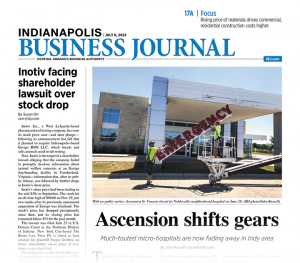 John Russell examines what came of the strategy by Ascension St. Vincent to open micro-hospitals across central Indiana, with designs on upending the traditional hospital model. The idea never took off, and the flagship neighborhood hospital, located in Noblesville, closed in late June. Also in this week’s issue, Daniel Bradley has the latest on plans to create the massive LEAP Innovation and Research District in the Lebanon area. And Dave Lindquist pops the cork on the success story behind Mom Water, a hard seltzer manufactured in Indianapolis. 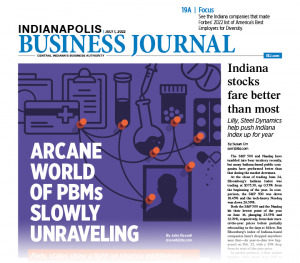 The major stock indexes tumbled into bear territory in the first half of 2022, but many Indiana-based public companies have performed surprisingly well during the market downturn. Susan Orr has more on how the Indiana Index and solid performers like Eli Lilly and Co. are holding the line. Also on this week’s issue, John Russell pulls the curtain back on pharmacy benefit managers, which operate as middlemen between pharmacies, drugmakers and health insurance plans. And Daniel Bradley details the plans behind the $59.1 million expansion of the Boone County Jail, which officials say will help lead to an increased focus on rehabilitation and less on warehousing inmates. 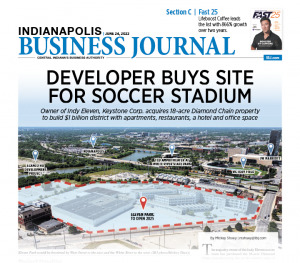 Ersal Ozdemir, majority owner of the Indy Eleven, has purchased the 18-acre Diamond Chain industrial site downtown through his development firm Keystone Corp. to build a soccer stadium and mixed use district that could top $1 billion. Mickey Shuey has the details about the plans and explains why the cost of the project is up so much since Ozdemir first proposed Eleven Park three years ago. Plus, reporter Susan Orr reports about new layoffs in the tech sector—but why those who have lost their jobs appear to have plenty of options. And this week's IBJ includes our annual Fast 25 list, which details the fastest-growing companies in central Indiana. At the top of the list is Lifeboost Coffee. which has grown a startling 866% over the past three years. 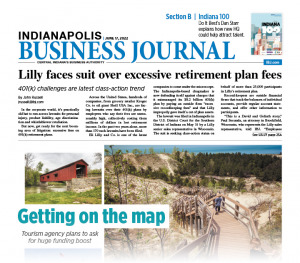 Indiana tourism officials are betting big on efforts to bring more visitors to the state, in part with a public campaign that they hope will spur a significant funding increase from the General Assembly next year. Mickey Shuey outlines the $5.6 million campaign they’re calling “IN Indiana.” Also in this week’s issue, John Russell reports that Eli Lilly and Co. is defending itself against a lawsuit charging that it mismanaged its $8.2 billion 401(k) plan, resulting in excessive fees for employees. And Daniel Bradley outlines Westfield’s plans for the $190 million Grand Millennium Center, which will include a library, event center, medical facility and hotel. 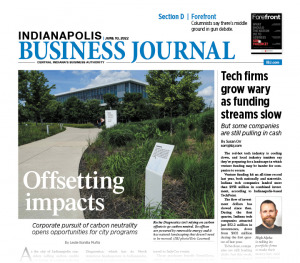 As the city of Indianapolis considers selling carbon credits to invest in carbon reducing forestry products, it might be able to turn some sizable local companies into customers. Leslie Bonilla Muñiz writes that corporate interest in carbon neutrality opens opportunities for city programs. Also in this week’s issue, Daniel Bradley explains how the not-for-profit Agape Therapeutic Riding Resources helps people with disabilities and mental health challenges by providing opportunities to bond with animals. And Mickey Shuey reports that the Indianapolis Airport Authority has updated its incentives plan to free up more fuel to chase nonstop flights. 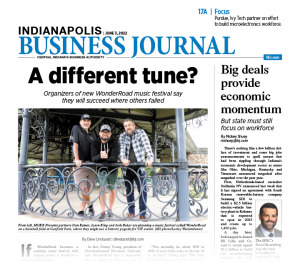 In a flurry in late May, Indiana officials announced economic development deals with major manufacturers that would bring more than $4 billion in investment, but experts say the state can’t rest for a second. As Mickey Shuey reports, the competition for big projects remains tight, and the state still must address persistent weaknesses such as its undertrained workforce, the high cost of health care and rising energy costs. Also in this week’s issue, David Lindquist explores why multiday music festivals have trouble taking root in central Indiana—and whether the upcoming WonderRoad fest can succeed where others have failed. And Daniel Bradley details the fight between residents of a 60-year-old carnel neighborhood and a proposed $133 million redevelopment project that would extend up to their backyards. 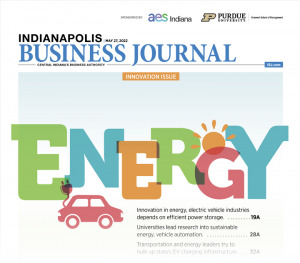 The latest edition of IBJ’s annual Innovation Issue focuses on the future of energy in Indiana—coincidentally just a few days after the announcement of a planned, $2.5 billion electric vehicle battery plant in Kokomo. John Russell examines how power storage will be vital to allowing solar and wind energy to thrive. Susan Orr explains how Indiana’s auto industry will need to adjust to disruption as electric vehicles gain traction. And Leslie Bonilla Muñiz lays out how Indiana will need to establish networks of electric vehicle charging stations. Plus, the rise of NFTs in Indiana, how high-protein bugs could be more common on menus, and ways to keep employees feeling energetic and engaged. 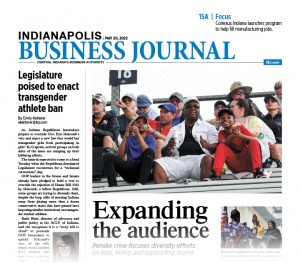 Penske Entertainment, the owner of the IndyCar Series and the Indianapolis Motor Speedway, announced in July 2020 that it planned to launch programs to diversify the series’ teams, hire more people of color as contractors and employees at the track and expand the sports fan base. Nearly two years in, experts and advocates say Penske has made significant progress but there’s still much to be done. IBJ’s Mickey Shuey has the story. Also in this week’s issue: As Indiana Republican lawmakers prepare to override Gov. Eric Holcomb’s veto of a law that would bar transgender girls from participating in girls’ K-12 sports, activist groups on both sides of the issue are ramping up their lobbying efforts. And Daniel Bradley reports that construction is starting on the first piece of a massive mixed-use redevelopment in downtown Noblesville that will add more than 200 apartments units by 2025. 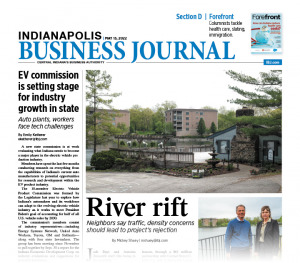 The owners of the Willows Event Center, tucked into a White River oxbow just north of Broad Ripple, want to redevelop the site with more than 250 apartments and town houses. Mickey Shuey reports on the tidal wave of opposition to the project from prominent and well-heeled local residents who fear the project is too big and could exacerbate traffic hazards along a tricky portion of Westfield Boulevard. Also in this week’s issue, Dave Lindquist outlines a new program encouraging Indianapolis employers to pay workers at least $18 per hour, based on the theory that higher wages will result in lower staff turnover and higher productivity. And we honor the city’s top physicians, researchers, volunteers and community health providers in IBJ’s annual Health Care Heroes awards program. 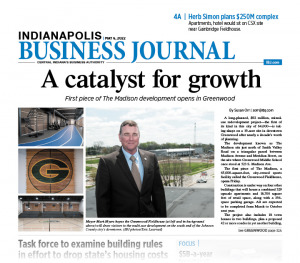 A long-planned, $92 million mixed-use redevelopment project—the first of its kind in this city of 64,000—is taking shape on a 19-acre site in downtown Greenwood, starting with a city-owned sports fieldhouse. Susan Orr outlines the strategy behind The Madison and reinvigorating Greenwood’s core. Also in this week’s issue, John Russell has all the details about Eli Lilly and Co.’s new weight loss drug, tirzepatide, which has performed spectacularly well in clinical trials and could boost Lilly’s top line by $5 billion per year. And Leslie Bonilla Muñiz examines how a 13-member state task force plans to address Indiana’s affordable housing shortage, in large part by rethinking regulations that builders and critics say drive up construction costs. 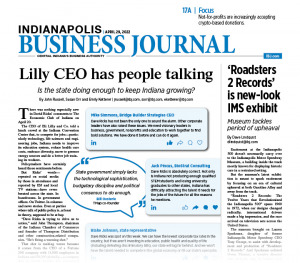 Public comments by Eli Lilly and Co. CEO Dave Ricks examining the state’s shortcomings as a potential destination for new companies and investment have sparked conversation and debate across Indiana’s business community. Reporters John Russell, Susan Orr and Emily Ketterer asked business leaders to address the question of whether the state is doing enough to keep Indiana growing and what an effective strategy might look like. Also in this week’s issue, Dave Lindquist dives into one of the most ambitious and revealing exhibits in the history of the Indianapolis Motor Speedway Museum: “Roadsters 2 Records: The Twelve Years That Revolutionized the Indianapolis 500.” And our political team has a preview of the most consequential races on Primary Election Day. 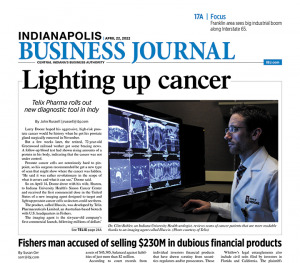 The global market for nuclear medicine is expected to quintuple in about a decade, and a large slice of that growth is expected to occur in the Indianapolis area. John Russell reports that Telix Pharmaceuticals, which has developed an imaging agent that makes cancer cells light up in scans, is having a breakout moment. Also in this week’s issue, Susan Orr unravels the story of a Fishers man facing a tangle of legal issues related to accusations he was involved in the nationwide sale of more than $230 million in questionable financial products. And Daniel Bradley reports that interest is accelerating in the slow-to-develop Zionsville’s Creekside Corporate Park now that construction of the new Rahal Letterman Lanigan Racing team headquarters is well under way. 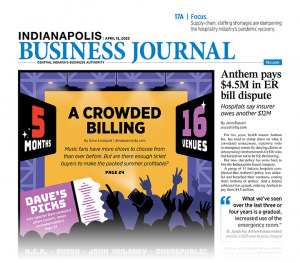 Indianapolis-based health insurer Anthem Inc. has been trying for several years to clamp down on what it considers unnecessary, expensive visits to emergency rooms, but its tactics have come back to bite it. John Russell reports that a federal arbitrator has ordered Anthem to pay $4.5 million to a group of 11 Indiana hospitals that complained Anthem’s policy was unlawful and breached their contracts. Also in this week’ issue, Mickey Shuey and Daniel Bradley examine the record prices paid for Indiana farmland, driven in part by demand from developers. And Dave Lindquist heralds what could be the busiest summer concert season in history—and raises the question of whether there are enough ticket buyers to make it profitable. 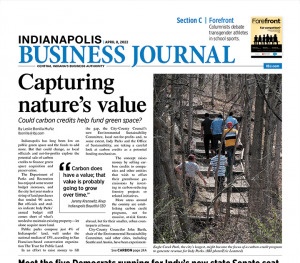 Indianapolis long has been low on public green space and the funds to add more. Leslie Bonilla Muñiz reports that local officials and not-for-profits now are exploring the potential sale of carbon credits to finance green space acquisition and preservation. Also in this week’s issue, Emily Ketterer profiles the five Democrats who are running for a newly draw seat in the Indiana Senate that runs through the heart of downtown Indianapolis. And Daniel Bradley reports that Hamilton County is finally ready to begin its $29 million reconstruction of the heavily traveled intersection at 146th Street and Allisonville Road. 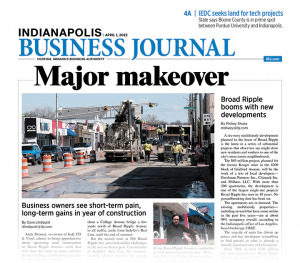 Construction will be happening all over Broad Ripple over the coming year as major new development projects either start or finish construction and the city invests some $7 million into drainage improvements, bridge updates and a new trail along the river. In separate stories—one focused on infrastructure and the other on residential and commercial projects—reporters Dave Lindquist and Mickey Shuey offer the details. Plus, John Russell explains why Eli Lilly and Co.'s surging stock price means the Lilly Endowment—which has no affiliation to the company but whose assets are mostly in Lilly stock—will soon need to give away more cash. 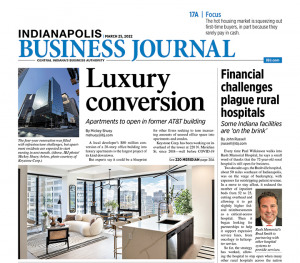 Get a good look at Indianapolis’ future with the latest edition of IBJ’s annual Forty Under 40 feature, spotlighting the young movers and shakers who are setting the tone for central Indiana and getting things done. Also in this week’s issue, John Russell reports that 14 of Indiana’s 54 rural hospitals are at immediate risk of closing due to continued financial losses and lack of financial reserves. And Mickey Shuey has details on the $80 million conversion of downtown’s 20-story AT&T building into luxury apartments.