Finally, there’s a ranking that shows Indiana’s hospitals on the good side of the national average when it comes to the price of their services.

Indiana hospitals’ list prices, or charges, are a mere 320 percent of what the federal Medicare program pays, according to data collected for an article on “extreme markups” by hospitals, published this month in the journal Health Affairs.

Said another way, the list prices for Indiana hospital services are more than three times what the federal Medicare program determines is the cost of providing that service.

That’s actually lower than the national average markup of 340 percent, according to an analysis of 2012 hospital reports conducted by Ge Bai, an accounting professor at Washington and Lee University and Gerard Anderson, a well-known health policy expert at Johns Hopkins University.

Bai and Anderson’s study got the world of health wonks more than a little excited and generated headlines like these:

“The Hospitals that Overcharge Patients by 1,000 Percent” (The Atlantic)

Before folks get into too much of a tizzy, it's worth noting that the practice of high markups followed by discounts is hardly unique to hospitals. In fact, according to this article, hospital markups are in roughly the same range as that used for boutique designer jeans, high-end shoes and hot-selling eyeglass frames. And they don't hold a candle to the markups on prescription drugs.

Few if any people actually pay hospitals' listed charges. However, Bai and Anderson’s study makes clear the standard practice of aggressive markups at hospitals is harmful in more ways than people usually think.

High markups have no impact on the prices the Medicare and Medicaid programs set. Nor are the charges used much any more, as they once were, as starting points in price negotiations between hospitals and private health insurers, such as Anthem Inc.

But charges are used to calculate bills for uninsured patients. Obamacare mandates that those discounts be about 40 percent, but that discount off a 320-percent markup is still astronomical.

Also, patients who receive care at an out-of-network hospital (which is a growing possibility with narrow-network plans offered on the Obamacare exchanges) would be subject to the list prices.

In addition, casualty insurers (think of medical expenses paid by your auto insurance carrier) or worker’s comp insurers typically pay out-of-network charges. That’s because their policies promise coverage at any provider, making it difficult for those carriers to negotiate discounts in advance.

And these high charges can even trickle down to privately insured health plans, note Bai and Anderson.

“Hospitals with substantial market power can use the high markups as leverage with private insurers in price negotiations,” Bai and Anderson wrote in their Health Affairs article. “High markups and the possibility for high revenues from out-of-network patients make the option of joining a network less attractive to these hospitals, so they are less willing to negotiate with private insurers.”

(I would add that insurers with the market power to negotiate with hospitals in the Indianapolis and Indiana markets (read: Anthem) have traditionally opted to keep providers in their networks rather than going to the mat with them on prices. After all, employers and even individual customers in Indiana have consistently demanded it.)

Medicare's pre-set prices do not reflect hospitals' actual costs in all or even most cases (in fact, hospitals have become quite good at growing services for which Medicare prices are profitable and minimizing money-losing services). But recent research has shown have shown that hospitals with costs higher than Medicare's prices are usually those able to charge higher prices to private insurers.

As you can see below, the markups at 30 hospitals in central Indiana (for which Bai and Anderson had data in their study) included plenty that were at or above the national average: 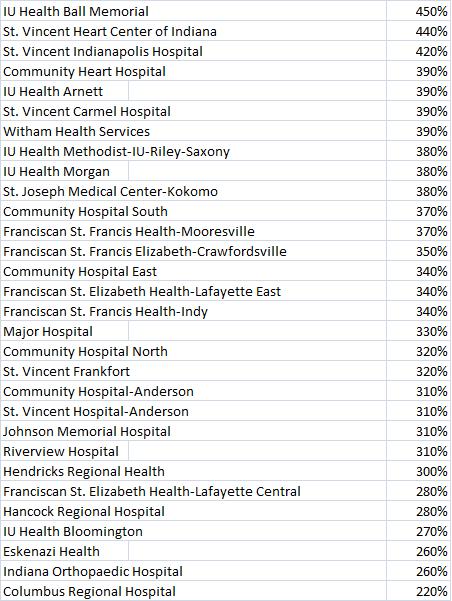