To help pay for Hoosier patients’ biggest medical bills, the Affordable Care Act sent $122.4 million to health insurers in Indiana, according to data released last week by the Obama administration.

That money, known as reinsurance payments, helped MDwise, Anthem, Humana, Assurant and the Physicians Health Plan of Northern Indiana keep a lid on losses even as lots of new patients with expensive or untreated medical conditions migrated into the private insurance market.

Nationwide, the Obama administration made $7.3 billion in reinsurance payments to health insurers. Those payments covered 80 percent of medical bills that ranged between $45,000 and $250,000. The reinsurance program, funded by taxes on health insurers and self-funded employer health plans, has been criticized by Republicans as a “bailout” for insurers.

The payments weren’t enough in all cases. New York-based Assurant Inc. asked for a 26 percent hike in premiums for 2016, due to high claims in Indiana, before that company decided to exit the Obamacare markets in all states.

But the program appeared to help other insurers.

Indiana’s biggest beneficiary from the Obamacare reinsurance program—Indianapolis-based Anthem Blue Cross and Blue Shield—requested a modest 3.8 percent premium hike for 2016. Insurers’ set their 2016 rates based primarily on their experience in 2014, since results from 2015 are still rolling in.

It received $63.6 million in reinsurance payments. However, Anthem had to pay out nearly $30 million under another Obamacare program—called risk-adjustment payments—because its health plan members were healthier, on average, than those covered by other insurers. A message left for an Anthem spokesman was not returned.

Indiana’s second biggest beneficiary of the reinsurance program—Indianapolis-based MDwise—actually requested a 19 percent price decrease for 2016. It received $17.2 million in reinsurance payments and another $18.4 million in risk-adjustment payments from other insurers.

“In the development of our 2016 premiums, our estimates of the impact of each of these programs played a part in the premium decreases we filed,” Dan Myers, an actuary at Wakely Consulting Group that worked on MDwise’s rate filings, wrote in an email. In fact, he added, expectations that these payments would come has already held Obamacare rates down. “MDwise, like all carriers, has decreased their initial premiums each year in expectation of this additional funding with the amount of the decrease lessened each year.”

The trouble is, the reinsurance program will end in 2017, even though the risk-adjustment program will live on.

That has Tony Nefouse, an individual insurance broker in Indianapolis, expecting premiums to spike up.

“I would expect individual premiums to go up $34-$45 per person per month to offset reinsurance” when that program expires, Nefouse wrote in an e-mail. “Even then, how many of the current exchange carriers will be able to be profitable?  If the carriers’ goal is a 5 premium profit margin, there is not a lot of room. The carriers with the deepest reserves will be able to tolerate the risk.”

Obamacare has made premiums spike in Indiana by 31 percent, according to an analysis last year by a Yale University economist.

That was due primarily to these factors: Obamacare required health insurance plans to pay for at least 60 percent of all expected medical claims; it required all health plans to cover 10 essential benefits; it required insurers to take all comers, regardless of their health status; it required insurers to charge their oldest adult customers no more than three times as much as their youngest adult customers. Also, Indiana’s high-risk insurance pool—which included patients with AIDS, hemophilia and other highly expensive conditions—was folded into the private insurance market for individuals and small employers.

In 2014, those higher costs were offset for more than 100,000 Hoosier buyers by Obamacare’s tax credits, which sent roughly $400 million to the four insurers that sold policies via the Obamacare exchange. Those four insurers were Anthem, MDwise, Physicians Health Plan and Coordinate Care.

Hoosiers that bought Obamacare off the exchange—by working directly with an insurer and its brokers—were not eligible for tax credits.

But the reinsurance and risk-adjustment programs were designed to keep health insurance markets stable during the uncertain beginning to the new market rules. A third program, known as risk corridors, had the same goal. Data for that program is scheduled to be released in August.

“From all appearances, the programs are operating successfully as intended,” wrote Timothy Jost, a law professor at Washington and Lee University, who blogs about Obamacare’s rules and their implementation, on the web site of the academic journal Health Affairs.

Here is a list of all payments made to insurers operating in Indiana in 2014: 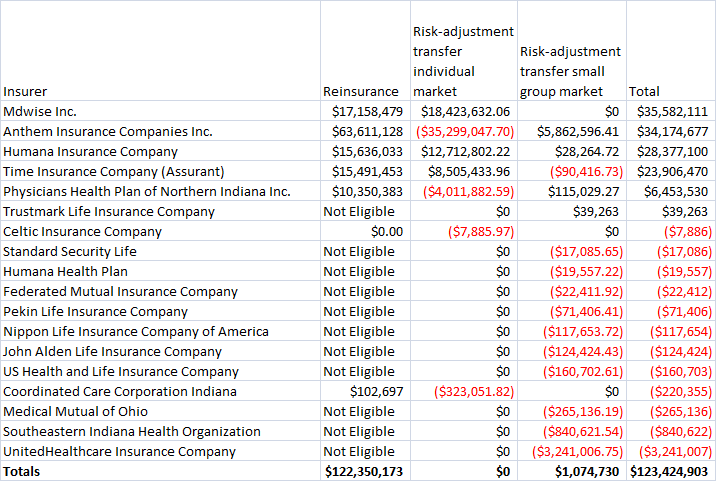