Anyone who works in health care will tell you—the regulations are out of control.

For proof of this assertion, just look at the oft-used chart below, which shows the long-term growth in jobs in the health care sector for physicians and for administrators, which coincidentally rises in line with galloping increases in health care spending: 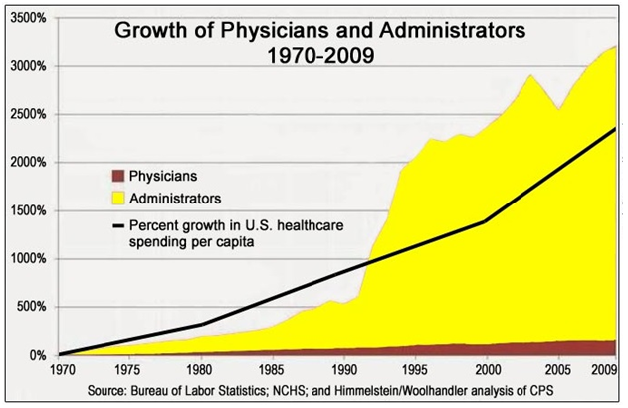 (The chart is based on the work of David Himmelstein and Steffie Woolhandler, health policy researchers at the City University of New York, who have for decades documented the bureaucratic waste in the U.S. health care system and argued for a single-payer system. A 2014 research paper they wrote concluded that one out of every four dollars spent on health care goes to administrative work.)

From 1990 to 2012, the number of health care jobs grew by 75 percent, but only one of every 20 of those jobs was filled by a physician, according to this analysis in the Harvard Business Review.

There is now one doctor for every 16 employees in the health care sector. And only six of those 16 non-doctor workers are clinical workers. The rest are administrators. Paper pushers. Bureaucrats.

Not shown in this chart are all the lawyers, accountants and consultants who also help health care providers play by the myriad rules of the U.S. health care system.

Those rules come from lots of different sources; from the Medicare and Medicaid programs, which pay for more than 40 percent of all health care spending; from private insurance companies that have adopted the same byzantine payment formulas as Medicare; from the Joint Commission, whose approval is required for health care providers to qualify for Medicare payment; from medical professional societies and state licensing agencies, which restrict what tasks different clinical workers can perform; and from Congress and state legislatures.

One set of laws that have ballooned over the past 25 years are the Stark anti-kickback statutes. They started as a simple prohibition against physicians sending patients to blood labs in which they had an ownership stake—because physicians who owned a blood lab tended to send more patients there for more tests, even unnecessary tests.

But now the Stark laws govern every contract a hospital system or physician practices signs with just about every clinical partner and medical products vendor it works with.

And I'm told by health care attorneys that since the Stark laws give no leniency for whether health care providers intended to violate their rules or not, virtually every hospital, doctor’s office and nursing home across the entire country is technically violating part of the Stark statutes every minute of every day.

“We know what a pain Stark has been,” said John Williams, an attorney at Indianapolis-based health law firm Hall Render Killian Heath & Lyman.

It can be as simple as not having a contract signed by one of the administrators who is supposed to sign it, said Williams, who lives in Indianapolis but commutes to Washington, D.C., to head Hall Render’s lobbying group.

But if there is any signature missing from a contract, a hospital system of physician practice can be fined for every day the contract remained unsigned until it was discovered. Because whoever has been billing the federal Medicare program under the assumption they had a proper contract in place has, in the government’s view, been overcharging taxpayers.

As if that weren’t bad enough, the federal Medicare program, which administers these laws, puts it on the health care providers to figure out how much they have “overcharged” the government by being out of compliance.

“There can be $100,000 in legal and accounting fees to determine the amount of overpayment,” Williams said. “There are all these resources trying to avoid these technical violations of Stark.”

One hospital client of his had a contract for a group of 50 cardiologists placed in the wrong pile, so it was never signed by the hospital administrator. The contract went undiscovered for two years—meaning every bill any one of those 50 cardiologists sent to Medicare over that 24-month period was invalid, and the money would have to be returned.

Williams had to counsel the hospital to set aside $600,000 as a reserve until it could get a final decision from the federal Medicare agency.

But he also decided there had to be a better way to handle this. So Williams and other attorneys at Hall Render launched the Stark Law Correction Initiative.

It was designed to come up with a way for health care providers to self-report their technical violations of the Stark laws and face pre-determined fines.

“We went to Capitol Hill and talked to various [health] committee staff, and said, “Do you know this is going on?’” Williams said. “The reactions were either, ‘How can that be possible?’ to ‘Why can’t they just keep their contracts up to date?’”

To the second reaction, Williams responded that large health systems might have 10,000 different contracts to manage all the relationships they have for providing care, and the laws of statistics suggest that there are bound to be contracts that go unsigned without anyone noticing for a while.

“Stark is so convoluted that even the professional staff on the committees don’t really understand it,” Williams said.

The coalition drew support from all kinds of groups, including the American Hospital Association. Rep. Charles Boustany, R-Louisiana, and Rep. Ron Kind, D-Wisconsin, have introduced legislation, known as HR 776, to fix the Stark laws.

The bill hasn't passed. But the ideas contained in it are starting to be put into practice anyway.

The Medicare agency, formally known as the Centers for Medicare & Medicaid Services, or CMS, incorporated some parts of HR 776 into its 2016 Physician Payment rule, which it finalized on Oct. 30. For instance, the new rules extend from 30 to 90 days the grace period for hospitals to obtain a missing signature on a contract once they become aware of it.

The legislation the Stark Law Correction Initiative helped to craft would set a $5,000 fine for any technical violation, if disclosed by a health care provider within one year of the violation. If self-disclosure happened after one year, the fine would be $10,000.

CMS could object to a health care provider calling its violation merely technical (as opposed to intentional). But CMS would have to act within 90 days—otherwise the violation would be accepted as merely technical.

The coalition led by Hall Render hired Virginia-based health care consultancy Dobson DaVanzo to assess the fiscal impact of that bill. The firm estimated it would bring the federal government as much as $1 billion in additional revenue over 10 years—because more doctors and hospitals would report their technical violations, rather than fixing them quietly and hoping no one noticed.

“You’re going to this massive increase in the number of disclosures, because by disclosing you’re eliminating your risk,” Williams said. “Hospitals get predictability with what they’re going to be paying these penalties."

Some lobbyists and legislators have asked Williams why he’s working to reduce the regulatory burden—when confusing regulations are a boon to health care lawyers like him.

“My response has always been there is plenty of legal work in the health care arena,” he said.