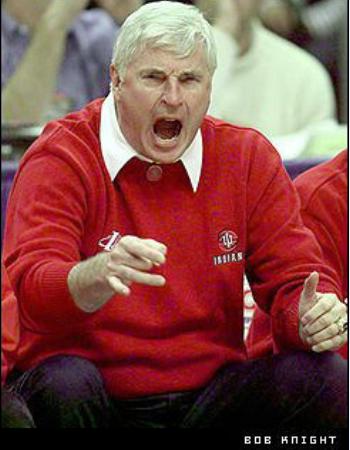 Not surprisingly, not everyone is thrilled with former Indiana University and Texas Tech basketball coach Bob Knight joining ESPN’s in-studio crew for its NCAA March Madness coverage. Knight’s move to the media side—or what Knight himself has from time to time called the dark (or is it dim) side—has some wondering if Knight will take cheap shots on-air at NCAA boss Myles Brand, who fired him when Brand was president and Knight was coach at Indiana. Others have suggested that Knight might use the occasion to shoot darts at his former employers at Indiana. Others are just tired of hearing from Knight altogether.

Kevin Hench, Fox Sports contributor, today wrote: “Oh, joy. The guy who could delight himself with juvenile and profane poetry about the press corps has joined the media. For a guy who occasionally shoots his hunting partners or assaults his beloved sons, I guess this latest spasm of schizophrenia, joining his most despised institution, should come as no surprise. Despite his avowed hatred of the press — or maybe because of it—ESPN has hired Bobby Knight as a studio analyst for the NCAA tournament. Here’s hoping His Almighty Blowhardness doesn’t take screen time away from the insightful—and, yes, affable—Tom Brennan and Doug Gottlieb.”

Do you think Knight will be a positive addition to or a detraction from ESPN’s coverage?