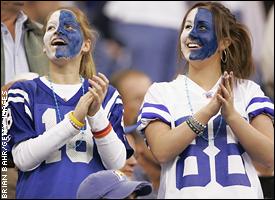 Indianapolis Colts fans have a unique opportunity to have their picture displayed on one of 200 permanent banners at Lucas Oil Stadium, which is set to open in September. Colts team photographers will be on hand March 19 for a photo shoot which is free and open to the public. Colts officials said the photographers will be looking to photograph the zaniest, most fervent Colts fans in Indiana. The photo shoot will be at the 56th Street Colts complex from 4 p.m. to 7 p.m. Doors open at 3 p.m. The team will select the top 200 pictures from the photo shoot to be on permanent “12th man” banners inside Lucas Oil Stadium. Fans are encouraged to wear their craziest game-day attire, which may include face painting, blue hair or whatever fans would like to show they are the Biggest Colts Fan.

One fan from the top 200 pictures, will also win a VIP Experience to the home opener at Lucas Oil Stadium. The VIP Experience includes four tickets, pre-game on-field sideline access, limo to and from the game and dinner for four at a downtown restaurant. Fans being photographed for the Biggest Fan Contest will be asked to sign a waiver granting rights of the photograph to the Indianapolis Colts.

Sports marketers are calling this latest stunt by the Colts’ sales staff a smart marketing move. What do you think?