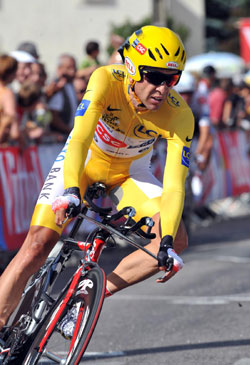 Carlos Sastre’s Tour de France victory was cemented in Paris July 27, but the wheels that carried him to victory were made in Speedway.

While Zipp Speed Weaponry has been providing high-end bicycle wheels to professional cyclists worldwide for 10 years, this is the first time the local manufacturer has made the wheels that rolled under the bike of the winner of the world’s biggest bicycle race.

Zipp officials this year are already projecting a double-digit sales increase, and they think their involvement with Sastre and his team will push those numbers higher. Zipp, which was acquired in 2007 by Chicago-based Sram Corp., does not divulge sales revenue.

Since Zipp’s wheels retail for about $600 to $900 each, its Tour involvement is no small investment for the local shop.

“It’s a significant commitment for us, but one we think is well worthwhile,” said Zipp President Andy Ording. “Our involvement in pro racing is a fantastic testing bed for our company. The amount of punishment a pro team can put on a set of wheels is astounding. Of course, having the winner ride our wheels will also be a strong marketing tool for us.”

In 2006, Zipp provided wheels for American Floyd Landis, who arrived in Paris in first place. But before Zipp could market their involvement with the Tour winner, Landis tested positive for a performance enhancing drug, and was later disqualified.

Zipp provides wheels free to its teams, and in exchange gets feedback from riders and coaches and also gets to use the teams in its marketing materials. Zipp officials are still formulating a marketing plan to capitalize on the Tour victor, known worldwide as the wearer of the yellow jersey. While the impact will be felt in the U.S., Ording said the impact could be even bigger in Europe, where cycling rivals soccer as one of the favorite pastimes.