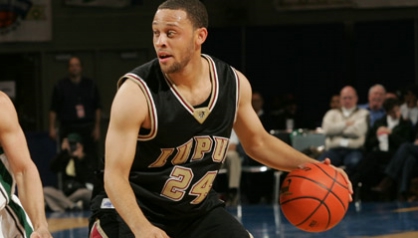 University officials said an announcement on the Jaguars’ 2008-09 schedule could come as soon as this week, after one last deal is finalized.

Sources close to the negotiations said the Jags would play some of its home games this season in the 18,345-seat Conseco Fieldhouse, but might still play the bulk of its games in its longtime home, a 1,200-seat gym attached to the Natatorium on the IUPUI campus. IUPUI Coach Ron Hunter recently said IUPUI wants to move at least some of its games to Conseco Fieldhouse and Pacers Sports & Entertainment want to host the games.

Sources said IUPUI is negotiating to play more games—possibly even the majority of its home games—in Conseco Fieldhouse during the 2009-10 season. Last season, IUPUI had 16 home games. The team went 26-7 last season and has received much attention since star player George Hill was selected in the first round of the National Basketball Association draft.

Although the financial terms of the deal are not clear, it could be a financial boost for both sides. Games in a higher-profile venue with enhanced amenities could drive significant attendance gains for IUPUI. Playing at the glitzy Fieldhouse also would be a solid recruiting tool for Hunter to attract the area’s best talent. Filling some holes on its calendar would benefit PS&E, and if the deal works out long-term, that might mean IUPUI would indefinitely suspend the notion of building a 8,000- to 10,000-seat arena, which could potentially compete with the Fieldhouse for events.