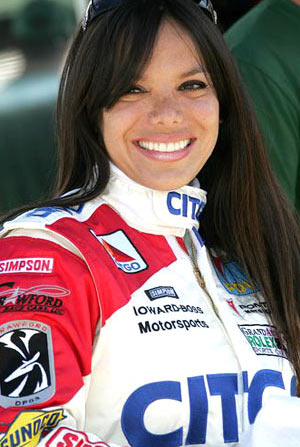 So who led more laps during this Indy Racing League season; Danica Patrick or Milka Duno?

Well, if you chose Milka Duno, you are right on. On lap 141 of Sunday’s race at Chicagoland, during a caution period, while most of the field ducked into the pits for their second-to-last pit stop, the Citgo crew had Duno stay out, knowing she only had one more stop to make. The move sent Duno up to the front of the pack, enabling her to lead her first laps in the IRL.

On the ensuing restart, she led the field down to the green. After a couple of laps under green, Helio Castroneves and Dan Wheldon zipped around, but Duno remained in the main draft before she made her last pit stop. Her five laps led, brought her team a bit of the spotlight, and also meant she led one more lap than Patrick this season. Granted, Patrick became the first woman to win an IRL race at Motegi, Japan earlier this year, and Duno hasn’t approached anything nearing that accomplishment. Duno, who placed 14th Sunday, does seem to have a growing fan following. But again, she’s nowhere near Patrick’s level—yet. Fan popularity aside, Duno has been widely criticized by IRL insiders for being slow on the track and at times a danger to other drivers. Even actress Ashley Judd, the wife of driver Dario Franchitti, told reporters Duno should be pulled off the track last year.

Duno’s primary sponsor, Citgo, appears committed to putting her back on the track next year. “We’ll continue to work for next year,” Duno said after Chicagoland. “We showed we have a lot of potential as a team. We just need to find the resources to improve and continue to build our team to be faster all the time. I have to say many thanks to all (my crew). They continue to believe in me, and I showed what we can do when we have good conditions. I have to thank Robbie (Buhl), my coach.”

The IRL could have a record crop of women racing nearly full-time next season. Along with Patrick and Duno, Sarah Fisher said she is confident she will find enough sponsorship to race full-time next year, and there’s a promising female driver in the Indy Lights Series this year. Ana Beatriz, who races for Sam Schmidt Motorsports, has a solid sponsorship with Healthy Choice, and finished third in the overall Indy Lights points standings this year. I’ll write more on Fisher and Beatriz’s plans later this week. So stay tuned.