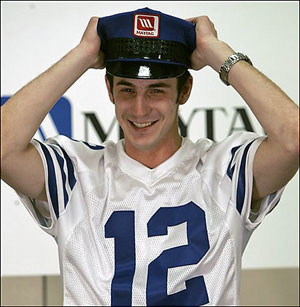 News flash … This just in … Good-looking NFL quarterbacks make more money—a lot more money—than less attractive ones. Seriously. A group of Utah economists using high-tech computers to measure the symmetry of 121 NFL quarterbacks’ faces from 1995 to 2006 found there’s a correlation of what society deems to be a good-looking man and his salary as an NFL signal caller. I repeat, this is serious. It’s more than serious, it’s science for crying out loud.

“One should note that although looks are statistically significant, it is still the case that other factors—like actual performance on the field—drive the player evaluation process,” David Berri, a sports economist and an associate professor at Southern Utah University told the Kansas City Star.

I wouldn’t bring this up if the study didn’t conclude that a good-looking QB can make $300,000 more per year than a homely one. Now that’s a lot of money. They hold up Kerry Collins as an example of a good-looking quarterback and a former Indianapolis Colts QB as a not-so-good-looking quarterback. I’m not going to name the former Colt. That would be mean. If you want to know more, you’ll have to click here. But I can tell you I think there might be a few other reasons why the former Colt didn’t make as much money as Collins that didn’t have anything to do with his face. His mouth, maybe, but not his face.

So using this science in reverse, I’ve concluded that Peyton Manning must be about 7.2 times more good looking than Jim Sorgi. Well, it’s a logical conclusion given that Manning is due to make $11.5 million this season and Sorgi $1.6 million. And you thought it was the laser rocket arm and ability to audible at the line of scrimmage.

But there’s a twist. In stories like this, there’s always a twist.

“The results were strongest for the quarterbacks who don’t get on the field as much,” Berri said. “So the quarterbacks at the lower end of the income distribution, they’re the ones who see the biggest payoff.”

So I’ll let you draw your own conclusions on this one.