It’s not easy to improve an iconic venue, but that’s just what Butler University has attempted to do.

Butler officials are raising the curtain this week on the new and improved Hinkle Fieldhouse. Time will tell if Butler officials get rousing applause or even a standing ovation for its attempt to make one of the state’s most beloved basketball cathedrals even better. 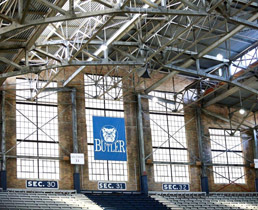 The spiffed-up fieldhouse has benefited from $36 million in renovations but retains its classic character. (Image courtesy Butler University)

Fans will get their first look at the $36 million Hinkle facelift Saturday when the Butler men’s basketball team plays Tony Hinkle’s alma mater, the University of Chicago, in a pre-season game. Hinkle was the legendary Butler coach for whom the venue was named.

For the public, Butler officials promise the renovations will mean greater comforts—4,500 new chair-back seats throughout the lower portion of the fieldhouse, a video scoreboard (a first for Hinkle), wider concourses, larger concession stands, additional restrooms and an expanded gift shop.

“Everything we’ve done has been done with the mindset of making lines faster and space more abundant while retaining the history and charm of Hinkle Fieldhouse,” said Butler Athletic Director Barry Collier.

Behind the scenes, the fieldhouse has added a weight room that’s nearly twice the size of the old one. There are new training facilities, locker rooms, classroom space for student-athletes, offices for coaches and staff, and meeting space anyone on campus can book.

The men’s and women’s basketball teams have new video rooms to study game film. The men’s facility was made possible by a gift from former Butler student and basketball star Gordon Hayward, now with the NBA’s Utah Jazz.

The 86-year-old fieldhouse also has undergone extensive exterior renovations, including the tuck pointing of 282,000 bricks, replacement of more than 9,700 windowpanes with energy-efficient glass and updated utilities.

The upgrades were made with the idea of keeping the historical integrity of the facility, said President James Danko.

“Butler University is always conscious of Hinkle Fieldhouse’s place as a state and national landmark,” he said in a statement.

Opened in 1928 as Butler Fieldhouse, the 15,000-seat venue reigned as the nation’s largest basketball arena for 20 years. Community leaders contributed $750,000 for construction under the agreement that the Indiana High School Athletic Association basketball championships would be staged there. That tradition continued from 1928 to 1971.

Hinkle Fieldhouse gained national prominence when it was featured in the 1986 movie “Hoosiers.” The final game of the movie was filmed in Hinkle, re-creating the Milan Miracle from the 1954 state championship game.

Over the years, as improvements were made, the facility did lose a few seats. A few hundred more were lost during the most recent renovation, and now the venue seats just under 10,000.

Hinkle Fieldhouse was named to the National Register of Historic Places in 1983 and declared a National Historic Landmark in 1987.