Indianapolis-based Sun King Brewing Co.is ready to tip off the Indiana Pacers season with the debut of an appropriately named beer: Tip-Off Ale. 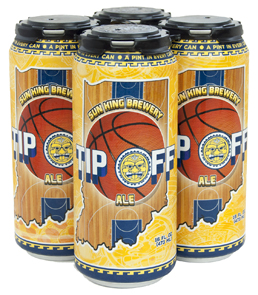 Sun King this month signed a deal with the Pacers to sell its new beer in commemorative blue-and-gold basketball-themed cans—as well as on draft—at nine Bankers Life Fieldhouse locations, beginning with the team’s home opener on Thursday.

Pacers sales boss Todd Taylor thinks the commemorative cans will be as popular as the beer inside.

Sun King and the Pacers will throw a party from 5 p.m. to 7 p.m. on the east end of Georgia Street before the home opener to celebrate the start of the season and debut the new brew.

Each can will feature a customized label—made by Toledo, Ohio-based Century Label—featuring a basketball court cut out in the shape of Indiana, the Sun King logo, basketballs and other basketball-themed icons.

Because canned beer isn’t allowed in many parts of the fieldhouse bowl area, the canned Tip-Off Ale will be poured into cups. Patrons will receive a voucher to allow them to retrieve an empty commemorative can as they exit the venue.

Tip-Off Ale was the brainchild of Sun King co-owner and brewmaster Dave Colt. It is described as a German-style altbier with a rich copper color and mellow malt flavor.

Customers will be able to find Tip-Off on draft and in cans at both Sun King locations—the original brewery in downtown Indianapolis and the Tap Room and Small-Batch Brewery in Fishers. Additionally, customers can purchase Tip-Off draft at select bars, restaurants, and 16-ounce cans at liquor stores throughout central Indiana.

Tip-Off came about through conversations between Sun King and Pacers officials earlier this year.

“We’ve been a sponsor of the Pacers for four years and we’ve made beers in association with other teams and organizations and thought with the rich basketball heritage here, it would be a perfect match,” said Sun King spokeswoman Elizabeth Belange. “Sun King’s five co-owners are really big sports fans, and this is something they really wanted to do.”

In 2012, Sun King started brewing Indians Lager in conjunction with the Indianapolis Indians, and Belange said it’s one of Sun King’s top-selling seasonal beers. Sun King also makes a themed beer, Naptown Brown, for the Naptown Roller Girls roller derby team as well as one for the GenCon gaming convention held annually in Indianapolis and the Broadway Across America events held locally.

“I wouldn’t be surprised if we work something out with the Indy Fuel [hockey team],” Belange said. “The [Indianapolis] Colts are a little difficult because they have a deal with Budweiser.”

“But this isn’t just about sports,” Belange added. “We’re really into the arts and other events here in the community.”

Colt “has a vision” for a specially flavored beer for each sport or event Sun King partners with, Belange said.

“At Sun King we love brewing unique beers and we love utilizing the skills of our brewers,” Belange said. “Everyone’s palates are different and it changes with the seasons. Dave Colt has distinct ideas, a vision, of what flavors pair well with each season and the events of those seasons. We’ve had tremendous success with these [themed, seasonal beers].”

In addition, to supplying the Pacers-themed beer, Sun King and the Pacers are planning a number of events beyond opening night. Those include a craft beer night with tailgating events and a Sun King Beer Night featuring a “dress like a brewer” competition where competitors will try to compete in basketball skill drills wearing cumbersome brewers’ gear.

“We’re very excited about selling Tip-Off Ale at Bankers Life Fieldhouse,” Belange said. “We’re hoping all of this catches on and we do it every year.”