IndyCar Series driver Josef Newgarden is reaching out to a younger audience in a unique way.

Newgarden is teaming with Charlotte, North Carolina-based content development firm, Apex Legends, to publish a children’s book, “Josef, The IndyCar Driver,” that he hopes will not only teach youngsters to love reading—but racing as well. 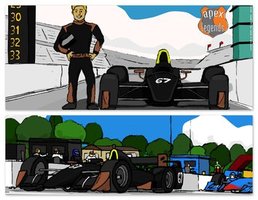 “This is a really interesting, unique project that I hope the IndyCar community gets behind,” said Newgarden, who drives for Carpenter Fisher Hartman Racing. “A book like this is a great way to get kids excited about racing and I’m honored that my personal story will be featured in this project. This is also an inspiration story that teaches kids that they can accomplish whatever they set their mind to.”

Newgarden, 24, will work with Apex author and illustrator, Chris Workman, to create the book. Workman has one other racing-related title to his credit. “The Longest Day—A Childhood Race Adventure” tells the story of a father and son bonding together at the prestigious 24 Hours of Le Mans.

“I’m really energized by this project,” said Workman, a father of three. “Not only will the story provide an exciting, realistic look at IndyCar racing, but ‘Josef, The IndyCar Driver’ will be very authentic to Josef's real life experience rising from his days in karting to one of today’s best IndyCar Series drivers. Our hope is it will give young kids who are dreaming of being a [race car] driver a taste of what it takes to reach that goal and inspire them to take the first step. In fact, to inspire them to chase any passion they have by using the real-world example of Josef.”

“Josef, The IndyCar Driver” is scheduled to be completed in time for the start of the 2016 IndyCar Series season in March. Apex Legends is self-publishing the project, and an Indiegogo campaign is being launched to raise money for the first printing and promotional activities.

“While this book will definitely appeal to IndyCar Series fans, a big goal for this program is to spread the open wheel racing message to a much broader audience,” Workman said.

Those contributing to the campaign by Nov. 22 can pre-order the book and get exclusive perks such as posters, autographed copies of the book signed by Newgarden and a VIP event package.

Newgarden burst onto the open-wheel scene by winning the 2011 Indy Lights championship, which earned him a full-time ride in the IndyCar Series.

His easy-going nature and sense of humor has made Newgarden a favorite of racing fans young and old since he first entered the IndyCar Series in 2012. Last year he notched his first pole position and two victories on the open-wheel circuit. After finishing seventh during a breakout IndyCar season last year, the Nashville, Tennessee native will enter the 2016 season as one of the favorites to contend for the overall series title, despite driving for one of the smaller teams.