Update: The high bid for the 1907 Stoddard-Dayton was $210,000, but that was below the minimum asking price from the buyer. So it did not sell Saturday at the Mecum Auctions event in Indianapolis.

One of the featured cars to go on the block at this week's Mecum Auctions event at the Indiana State Fairgrounds is a sporty ride with deep roots at the famed Brickyard.

One of only three 1907 Stoddard-Dayton Model K Runabouts known to exist will be sold at Mecum’s auction in Indianapolis this week. It's the type of automobile that won the first-ever car race at the Indianapolis Motor Speedway.

The Stoddard-Dayton’s name became even more famous in 1911 when Carl Fisher, who built and co-owned the Speedway and was the Indianapolis dealer for Stoddard-Dayton, drove one as the first-ever pace car used for an auto race when he led the field to the start of the inaugural Indianapolis 500.

The car being sold at this week’s auction also has an interesting story behind it.

This Model K Runabout was discovered in a barn in South Dakota and what will be rolled out at the Indiana State Fairgrounds is the result of a no-expense-spared, multi-year restoration by Brass Era-experts David Noran and Greg Cone, according to Mecum spokesman David Morton.

Mecum officials think the restored vehicle will sell for between $200,000 and $250,000. It will cross the auction block Saturday afternoon—likely around 3 p.m., Morton said.

This year’s Mecum Indianapolis Auction began Tuesday, with the highest-priced cars rolling onto the block Thursday, Friday and Saturday afternoons.

More than 30,000 sellers, buyers and spectators are expected to attend the five-day auction with more than 7,000 expected to be packed in Saturday. Cable television channel NBC Sports Network will carry 7-1/2 hours of the auction live.

By Saturday afternoon, the show will be in high gear with an estimated 30 autos an hour being auctioned.

Believe it or not, the Stoddard-Dayton won’t be the most expensive vehicle to sell. Mecum Auctions CEO Dave Magers expects dozens of cars to sell for well over $100,000, with some selling for $1 million or more.

Coming off the biggest Mecum auction in the organization’s 28-year history in Kissimmee, Florida in January, Magers is optimistic sales will be way up this week in Indianapolis. 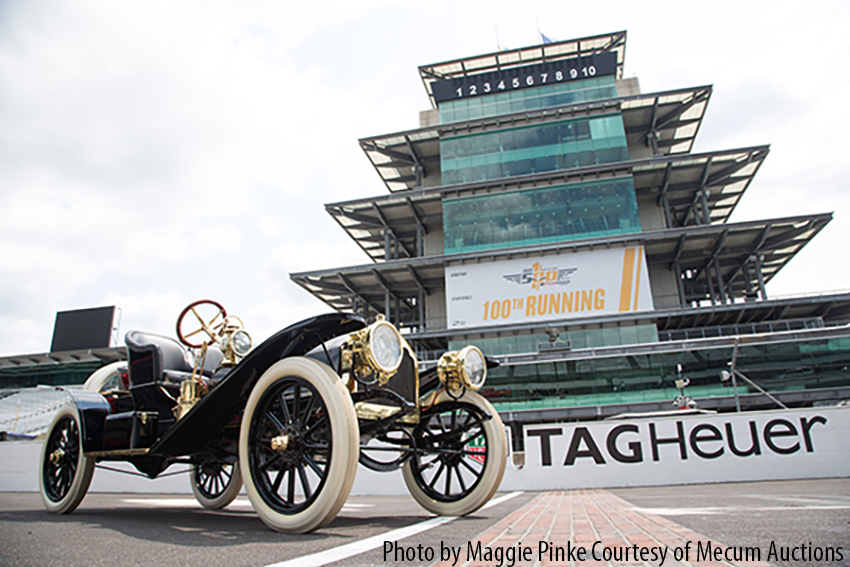 In Indianapolis last year, Mecum put 1,300 cars up for auction with 900 vehicles selling for $42.8 million. This year more than 1,800 vehicles will go on the auction block in Indianapolis. Magers expects three-fourths of those to be sold, saying total sales could approach $60 million.

There are two other reasons Indianapolis is a good market for Mecum. All the activity going on at the Indianapolis Motor Speedway this month brings a lot of car people to the city during the auction, Mecum officials said.

And secondly, and maybe more importantly, people in the Midwest—and especially Hoosiers—love their muscle cars.