The IndyCar Series got a shot in the arm Tuesday when one of its biggest teams—Andretti Autosport—announced a major sponsorship deal for one of its most popular drivers.

Andretti signed a three-year deal with Indianapolis-based retailer HHGregg Inc. to be the co-primary sponsor of Marco Andretti’s No. 27 car, as well as a team-wide sponsor across all Andretti Autosport cars, beginning in 2017. 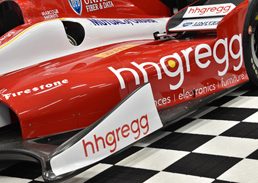 HHGregg will be the primary sponsor for the No. 27 car for half of the races every season. (Image by Chris Owens courtesy IndyCar)

Although terms of the deal were not disclosed, sports marketers estimated it to be a sizable multimillion-dollar deal likely stretching into the eight-figure realm over three years. Generally, a primary sponsorship for an entire season costs $5 million to $8 million depending on the strength of the team and driver.

As the co-primary sponsor, HHGregg will have its logo and colors on the car for half—or about eight—of the IndyCar races in strategically determined markets.

“HHGregg did a test run with the IndyCar Series and Andretti Autosport this year and it went very well,” said Zak Brown, founder of Zionsville-based Just Marketing International, which represented HHGregg in the deal.

“The deal helped boost store traffic, sales, exposure and partner engagement. Maytag was one of their partners that was very involved in the [IndyCar] sponsorship this year, and found it was good for them," Brown said.

The deal is especially sweet for Andretti and the IndyCar Series given that it comes on the heels of another team losing one of its biggest sponsors. Late last month, Target announced it is leaving Chip Ganassi Racing after 27 seasons as a sponsor.

Not only is Target one of Ganassi’s biggest sponsors, but the retail giant is one of the longest standing sponsors in the IndyCar Series. Some sports marketers wondered if other sponsors would take a cue from the Minnesota-based retail giant and hit the door too.

"All sponsorships in all sports are pretty tough right now. It’s not a great environment,” Brown said. “With that being said, IndyCar is pretty strong. Yes, Target went away, but I don’t think that’s any reflection on the series. No sponsor lasts forever."

“This is a great sign, not just for Andretti but the entire series for multiple reasons,” said Larry DeGaris, director of sports marketing at the University of Indianapolis. “Bringing retailers on board attracts other brands. That was one of the big benefits of Target. Manufacturers want a seat at the table. They want access, and sponsorships deliver that. So when a retailer joins the series either directly or through a team, they bring with them the manufacturers they represent. There’s a ton of potential with this HHGregg sponsorship.”

DeGaris added that it’s also good for the series from a business-to-business perspective.

“A lot of sponsors become part of the series to have access to and network with the other sponsors,” DeGaris explained. “HHGregg will bring a lot more than just their own company to that mix, and the other team and series sponsors will see a lot of value in that.”

Several drivers and team owners this week told IBJ that primary sponsors are difficult to come by, with those committing for more than one year especially precious. Last summer, three team owners told IBJ that at least half of IndyCar's teams faced serious financial difficulties.

GoDaddy, National Guard and Apex-Brasil are among the other series sponsors that have departed in the last two years. And a dearth of big sponsors has kept some of IndyCar’s most promising young drivers parked.

Officials for Indianapolis-based HHGregg were enthused about extending the relationship with Andretti.

“Our relationship with Andretti Autosport and Marco has been incredibly successful for both sides,” HHGregg CEO Bob Riesbeck said Tuesday at a gathering at Andretti’s headquarters on Indianapolis’ northwest side. “As HHGregg continues to strive to deliver best-in-class product offerings, prices and customer service, we’re thrilled to be so closely connected with a brand that stands for excellence in its field as well. We’ve had a great experience with Marco and the team and are excited to be building a future together.”

HHGregg—an appliances, electronics and furniture retailer—began its relationship with Andretti this season. HHGregg officials said this year’s Indianapolis 500—the 100th running of the race—was a big success in terms of promoting their company and its products. Riesbeck added that the month of May, including the Grand Prix of Indianapolis, “will remain a pillar of consumer activation for HHGregg.”

Brown said HHGregg chose to be a sponsor in IndyCar over other race series because the retailer's products “are more technology-based, and the IndyCar Series is a good fit for that.”

For HHGregg, the deal with Andretti Autosport comes on the heels of its recent announcement to open 25 to 30 Fine Lines specialty stores over the next two years. The Andretti brand, and IndyCar race demographics, align nicely with HHGregg and its Fine Lines target customers, HHGregg officials said.

HHGregg will serve as the primary sponsor of Marco’s entry at several IndyCar races that align with Fine Lines markets.