The suites at Victory Field are in the on-deck circle for a major renovation.

The project marks the second consecutive off-season during which the home of the Indianapolis Indians has undergone a major facelift. 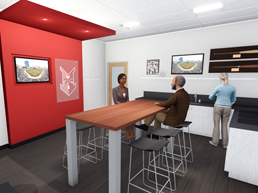 As soon as the team’s season concludes in early September, work will begin on a $2 million effort to modernize Victory Field’s 24 suites (see rendering at right). The beginning of the project might be delayed slightly if the Indians make a playoff push, which looks likely. (They've clinched the International League West at 75-61 with 11 games to go.)

On Friday, the city’s Capital Improvement Board, which owns the venue on the west edge of downtown, approved bids to strip down the suites ($680,500 to Lebanon-based 3D Professional Contracting Inc.), for woodworking improvements including new cabinetry ($423,000 to 3D Professional Contracting Inc.), new flooring ($92,650 to Fishers-based EF Marburger Fine Flooring), plumbing and heating-air conditioning improvements ($92,900 to Greenwood-based Sexson Mechanical) and electrical improvements ($133,100 to Indianapolis-based Ermco Inc.).

Additionally, there will be another $500,000 spent on new furniture, fixtures and other equipment–bringing the total expenditure to nearly $2 million, team officials said.

The improvements will enhance the game-day experience in the suites, Indians officials said. The project is the first renovation to the venue’s suites since Victory Field was built in 1996.

“Our suite holders have been important to this project,” Randy Lewandowski, Indians president and general manager, said in a statement. “Some of them have been with us since Victory Field opened in 1996, and we believe all of our suite level guests will be genuinely excited to see and experience these updates."

The renovations are expected to be finished by the beginning of the 2018 season.

“When we first took this idea to our current suite holders, it was obvious their input was going to be valuable in the renovation process,” said Matt Guay, Indianapolis Indians assistant general manager for tickets and operations. “They wanted something with a modern design and functionality, and better technology at their fingertips. We know we’ve done that with this project.”

The improvements come as part of a lease deal for Victory Field signed between the CIB and Indians in November 2015. The terms of the 20-year deal—which began April 1, 2016, and runs through March 31, 2036—include a provision for the CIB to pay $6 million over three years for improvements to the city-owned venue.

The CIB agreed to pay $2 million to upgrade the venue’s video board and sound system during the last off-season. The Indians paid an additional $400,000 for that project.

The Indians are contemplating an even bigger renovation to increase the number of seating options at the 14,200-seat stadium. Lewandowski told IBJ that the Indians won’t hesitate to invest the team’s own money in such a project, if necessary.

CIB officials confirmed to IBJ that discussions about such a major renovation are under way. The CIB would have to approve any such changes to Victory Field.