The Indianapolis Colts this week are unleashing the most extensive and expensive marketing campaign in the team’s history.

Colts officials are hoping the campaign triggers a stampede of good vibes from fans, corporate backers and even those inside the team’s headquarters.

On Wednesday, the Colts launched a web site, Coltsforged.com, to highlight the campaign’s theme. On Thursday, to coincide with the opening of the NFL season, the team will trot out a television advertising campaign that also will air heavily on Sunday during the Colts' Week 1 tilt in Los Angeles. 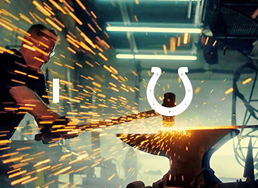 Iconography for the campaign plays up hard work and toughness. (Image courtesy of the Indianapolis Colts)

The research for the campaign began 18 months ago, according to Colts Chief Operating Officer Pete Ward. It included focus groups with ticket and suite holders, corporate partners and media members. The campaign has been spearheaded by team executives Carlie Irsay-Gordon and Kalen Jackson, the daughters of team owner Jim Irsay.

The Colts hired Philadelphia-based marketing and advertising agency 160over90 to help design the campaign, Ward said. While Colts officials would have liked to hire a central Indiana agency, Ward said, they were impressed by the Philadelphia firm’s NFL project experience.

Ward declined to say how much the Colts invested in the campaign, but said it was significant. One ad executive told IBJ that, if the Colts have 18 months invested in this campaign, it's definitely a six-figure expense and, depending on the media buy, could easily be a multimillion-dollar campaign.

“This is the most complex campaign we’ve ever done,” Ward said. “It’s important we get it just right.”

He insisted the campaign isn't driven by the persistent injury to star quarterback Andrew Luck, which will keep him on the bench for the start of the season, or the fact that the Colts still have tickets available for six of eight home games. Ward is confident the Colts will sell out all their home games this year.

“It’s not about this season,” Ward said. “It’s about a long-term strategy to define our brand.

“The campaign goes beyond football,” he added, “to say what the franchise stands for overall.”

IBJ and other media members got a sneak peek at the campaign Tuesday. The brand positioning statement for the campaign is “Forging Heartland Pride.”

“That’s what kept coming back to us from our stakeholders: hard work, pride and resolve,” Ward said.

Ward explained that the campaign will have four pillars: "family forward, always overcome, our way—the right way, and makers of moments.”

Another key theme to the campaign, Ward explained, is, “Everything will be earned.”

This campaign image reads, "In this game of inches, we always go the extra mile." (Image courtesy of the Indianapolis Colts)

As part of the campaign, all season ticket holders will receive a special horseshoe in the mail with the word “earned” emblazoned on it.

All fans attending the Colts home opener will receive a free T-shirt with a horseshoe on the front and a new team creed on the back, which starts, “This is Indiana. This isn’t East Coast noise or West Coast glitz. Just the steady beat of the Heartland. …”

At the home opener, the team also will roll out a new kickoff video—all filmed in Indiana—highlighting the themes of the campaign.

“A lot of hard work went into this campaign, and we’re happy with the end product,” Ward said. “This campaign is a way to highlight our team and unite our fans and to show the true spirit of our Indiana, Heartland values.”