A national sports ticket brokerage says Indianapolis Colts home game tickets are the lowest-priced on the secondary market of any of the 32 NFL teams.

TickPick pegs the average price of a ticket to a Colts home game at just under $117. (See chart below; click for larger view.) 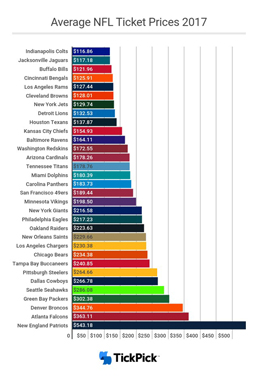 That’s about one-fourth of the average ticket price on the secondary market for New England Patriots home games—which are the highest-priced in the NFL at $543.18—and about one-third the price of tickets for Atlanta Falcons home games ($363.11). The Falcons, who lost to New England in last year’s Super Bowl, have the second most expensive average ticket price on the secondary market, according to TickPick.

Local ticket brokers paint a bleak picture for all but two of the Colts' eight home games.

“It’s terrible! It’s worse after the opener to the Rams than we thought it could be,” said Mike Peduto, president of Circle City Tickets.

The Colts lost their season opener in Los Angeles to the lowly Rams, 46-9. The Colts' home opener is this Sunday against the Arizona Cardinals, followed by their Week 3 home tilt against the Cleveland Browns on Sept. 24.

“This is as bad as I’ve seen it in a long while,” said FanFare owner Renny Harrison.

Even at bargain-basement prices, Harrison said, there is “zero interest” in Colts tickets right now, with the exception of games later this season against San Francisco and Pittsburgh.

“There’s no activity at any price,” he said. “We have more tickets than we’re going to sell [for this Sunday], and that’s unheard of for this time of year.”

“We are getting lots of calls from people who want to sell their tickets,” Peduto said.

Bad news for them.

“We’re offering half, less in some cases, than what we were for Colts tickets just a week ago,” Peduto said.

The biggest factor contributing to the low demand, brokers said, is the injury to star quarterback Andrew Luck, who is out indefinitely while recuperating from off-season shoulder surgery. It was announced this week he will not play in the home opener, and his availability for the remainder of the season is in question.

“There was some optimism early on with Ryan Grigson out as Colts general manager and Chris Ballard hired as his replacement,” Peduto said. “Then as Luck’s injury dragged on, pessimism started to build. The whole thing blew up after the game against the Rams. I couldn’t even stand to watch. I knew what it meant for our business.”

Luckily (no pun intended) for the Colts, the team sold out Lucas Oil Stadium for this Sunday’s Cardinals game, prior to the Rams debacle.

Colts Chief Operating Officer Pete Ward said the team has sold 63,000-plus tickets, with a few expected to be returned from the visiting team allotment that will go on sale later this week.

The team has already sold out the Oct. 8 home game against San Francisco—thanks to the scheduled retirement ceremony for Peyton Manning’s jersey—and the Nov. 12 home game against Pittsburgh—thanks to ravenous Steelers fans, some of which live here and others who travel here. Don’t be surprised if there are more Steelers fans than Colts fans at that game.

Ticket brokers also said demand for tickets to those two home games is strong. But not for any of the other home games.

The Sept. 24 home game against Cleveland also is nearly sold out, Ward said.

The Tennessee and Denver games are “close” to sellouts, Ward said, but there are about 3,000 tickets available for each of the Jacksonville and Houston games.

Ward told IBJ Tuesday that he’s confident all the games will sell out, continuing the Colts lengthy home sellout streak.

That’s of little comfort to ticket brokers—especially local ones who depend on Colts games for 20 to 30 percent of their annual revenue.

“If Andrew Luck doesn’t come back, it could actually get worse,” Peduto said. “If they don’t play any better than they did against the Rams, it could get a lot worse as the season rolls on.”