McLaren Technology Group appears to be rolling closer to a full-time run in the IndyCar Series.

McLaren, in partnership with Andretti Autosport, fielded a car for Spaniard Fernando Alonso in this year’s Indianapolis 500. Alonso quickly became a fan favorite, qualifying fifth and leading 27 laps before dropping out late in the race with a blown engine.

“Next time we come back [to IndyCar], we want to do it in a long-term and meaningful way,” Brown recently told IBJ.

Brown said it’s “not likely” McLaren would be ready to do that in 2018, but said a return to IndyCar—this time for the full season—is “a solid possibility” in 2019. 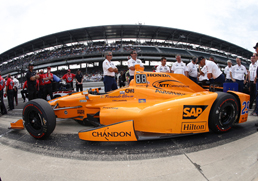 McLaren Technology Group generated a lot of excitement and good will by fielding a car for Fernando Alonso during the 2017 Indy 500. (AP photo)

The IndyCar Series is appealing, Brown said, due to its following in the U.S., a market in which Formula One—where McLaren competes—has limited exposure. This year, F1 only has one race in the U.S.—in Austin, Texas, on Oct. 22.

“McLaren has a long, successful history in IndyCar and specifically the Indy 500. This year’s race was a wonderful experience for everyone at McLaren,” Brown said. “America is an important market to us and we are interested in IndyCar in the future. It fits our brand well and our partners have interest in IndyCar and America, so when we find ourselves in a situation where we can be competitive and it’s commercially viable for us without it being a distraction to Formula One, we will take a serious look at entering.”

Urged by its tire producer Goodyear, McLaren regularly competed in the Indianapolis 500 in the 1970s, winning the race twice with a car piloted by Johnny Rutherford.

“Anywhere in the world you go, everybody knows the Indianapolis 500,” said Brown, who’s now based in London.

The addition of McLaren would come at a fortuitous time for IndyCar.

While IndyCar executives are anticipating up to three new full-time teams (Juncos Racing, Carlin Racing and Harding Racing) next season, another deep-pocketed team like McLaren would be warmly welcomed by IndyCar boss Mark Miles.

Juncos Racing and Carlin Racing have previously raced in the feeder Indy Lights Series, while Harding Racing debuted at this year’s Indianapolis 500 and ran a limited 2017 schedule. It’s unclear how many cars those teams would run next year, but it’s unlikely they would have the firepower to compete like McLaren could.

Next year, the IndyCar Series is rolling out a new chassis. While that could ratchet up excitement among fans, acquiring the new cars figures to be a considerable expense for IndyCar teams.

Miles has said he is hopeful the series will have 22 cars on the grid full-time in 2018. The open-wheel series had 21 cars this season.