Heading into the Thanksgiving weekend, here are some sports nuggets to chew on.

Pacers struggling at the gate

Despite a surprising 10-8 start to this NBA season and positive buzz for the club's new faces, the Indiana Pacers are still near the cellar for attendance.

Before the season started, few gave the Pacers a chance to win more than 35 games, and some hoops analysts said they would struggle to win 30. Yet, a fifth of the way through the season, the team is in position to make the playoffs with a high-octane offense and refreshed identity.

Despite that, the Pacers are ranked 29th in the 30-team NBA, with average home attendance of 15,053 through seven games.

Only the Atlanta Hawks are worse, with an average of 14,629.

The Pacers lag last year’s average attendance mark of 16,697 through 41 home games. Last season, the Pacers were 22nd in the league in attendance.

Any ticket executive will tell you that comparing the average of seven home games to 41 isn’t exactly an apples-to-apples proposition. And there’s little doubt Pacers attendance will tick up after the NFL season ends—as has been the case in recent years. If the team remains in the playoff hunt, that will help too.

It’s also important to note that the Pacers haven’t hosted any of the league's marquee teams that locals typically will shell out to see, regardless of the home product.

So that could mean four sellouts in less than a month, which should pull the Pacers out of the attendance doldrums.

Pass the milk: Mini finishers to get frothy medal

Ask anyone who’s ever run a road race: It’s all about the finishers' medal.

If a race has a hip entry shirt and a cool medal, that can drive participation up.

Next year, the OneAmerica 500 Festival Mini-Marathon will be awarding finishers what I believe is one of the coolest medals in the race’s long history.

The 2018 Mini-Marathon medal will resemble a milk bottle—like the one winners of the Indianapolis 500 have hoisted in Victory Lane for decades. 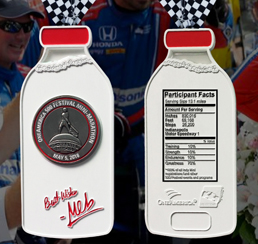 The front of the medal (see accompanying image) highlights the Borg-Warner Trophy and the date of this year’s race in raised silver. On the back of the medal, a faux nutrition label accents Indy Mini facts, including the number of inches, feet, and steps in the race.

“These facts pay tribute to the ingredients for victory, including the training, strength, endurance, and greatness that goes into every participant’s Indy Mini story,” said a statement from race organizers.

The 2018 medal is the first double-sided medal in the 42-year history of the Mini-Marathon. It’s also the second-largest medal the race has ever produced, finishing runner-up to the medal in 2016.

“To say we’re excited about this year’s design is a major understatement. We hope our participants are inspired by the significance of one of the most unique medal designs the Indy Mini has ever seen,” race organizers said in a statement.

The Big Ten Conference and the College Football Playoff Foundation have announced a partnership for funding educational initiatives in Indiana.

The CFP Foundation and Big Ten, in conjunction with Extra Yard for Teachers, will be recognizing teachers in kindergarten through eighth grade at the 2017 Big Ten Football Championship Game on Dec. 2 in Indianapolis, while providing funds to enhance educational efforts in those teachers' respective classrooms and schools.

Ten of the 15 teachers to be recognized are from central Indiana.

Earlier this season, I wrote about the lackluster demand for Indianapolis Colts tickets. The team’s 3-7 start hasn’t helped.

According to national ticket broker TickPick, seats for the Colts' remaining home games have the second-lowest average ticket price on the secondary market, at $75.46.

According to TickPick, only the Jacksonville Jaguars have a lower average ticket price at this point in the season, at $66.89.

It must be difficult to get Jacksonville fans fired up about NFL football. The Jaguars are 7-3 and leading the AFC South (the Colts’ division), which is a real rarity this late in the season.

The average price of a Colts game ticket on the secondary market is even lower than that for the winless Cleveland Browns, who are third from the bottom at $88.66.

New England Patriots fans looking for home game tickets on the secondary market will pay more than any other fan base, according to TickPick. The average price of a ticket for a Pats home game stands at $409.87, almost $100 more than the next highest team, Denver.