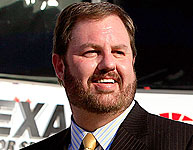 The Indy Racing League’s push-to-pass initiative is being met with mixed reviews.

Some team officials said the bigger teams with the ability to study the push to pass and other technical changes announced this week will get the biggest boost.

The Button as it is known in open-wheel circles was tried a few years back by Champ Car, and was instituted by the IRL Tuesday in hopes it would bring about more passing. It will debut (for the very first time in the IRL) this weekend at Kentucky.

The electronic gizmo is activated by a button on the steering wheel, and is said to add five to 20 horse power (depending on fuel mix) and an additional 200 engine revs.

At Kentucky, each driver will get 20 button pushes good for 12 seconds each. There must be a few seconds between each button push, so a driver can’t just blast away on the button for the entire final lap.

It’s all a little too much science fiction for Texas Motor Speedway President Eddie Gossage, normally a staunch IRL supporter.

“What’s next, a phaser so you can zap the car in front of you so it disappears?” Gossage said. “I just don’t like it. Let’s let this team outwork that team to win the race. Let’s let the ability to drive a car, to dive into a corner win the race. That’s what brings fans to the races, not pushing a button on a steering wheel.”

Gossage, who is known as an on-the-edge marketer, said he was not consulted before the push to pass initiative was approved by IRL officials, but he’s concerned fans at the track and those watching on TV won’t know when drivers are pushing buttons and when they’re not.

“I understand it’s the simplest, easiest, quickest way to get more passing on the track,” Gossage said. “But I’m old school. I liked it when ingenuity from various teams was the key to winning. The world’s always changing, and I guess I need to get with it.”