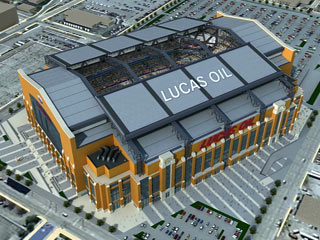 When the roof is open, temperature and air flow are still a concern, with many fans complaining it is simply too uncomfortable to enjoy the game. Putting the argument of hard-core fans vs. whiners aside for just a moment, there is concern that someone could suffer a heat stroke in Lucas Oil Stadium and sue the Colts, city, building designers and heaven knows who else. With 63,000 plus—in various physical conditions—attending Colts games, there has to be a real concern that someone in there won’t be able to handle the heat.

Stadium guidelines mandate the roof be closed if the temperature exceeds 90 degrees or plummets below 40. Also, since there is no drainage inside and many of the electronics are not water proof, any threat of precipitation mandates the roof be closed.

John Klipsch, director of the Indiana Stadium and Convention Building Authority, said air handling vents (especially in the upper levels) have been adjusted due to fan complaints about the temperature. But he noted that those adjustments will mainly affect the facility’s climate when the roof is closed.

When the roof is open, the heating or air conditioning is turned way down unless you’re in a suite, a stadium office or the areas around the concession stands. There simply isn’t a system in place to assure there is much air flow when the roof is open. It’s primarily left up to Mother Nature. But there’s a problem there too, according to LOS director Mike Fox.

“Although the common person might look at both as retractable roof stadiums, the design criteria for the two stadiums are completely different. Miller Park planned for very few days of heating or cooling the facility so it has a more open [design] at the concourses. LOS planned for more days of heating and cooling due to our all rear round schedule so sealing the facility was a big design criteria. Therefore, natural breezes through LOS are less frequent than they might be if designed the way of Miller Park.”

Klipsch added that the facility was never designed to have a “comforting breeze.”

“It’s like a sun-roof in your car, you can open it, and you may or may not get cool air coming in,” Klipsch said.

For more on the events the retractable roof is drawing to LOS—and their economic impact on the city, see the upcoming print edition of IBJ.