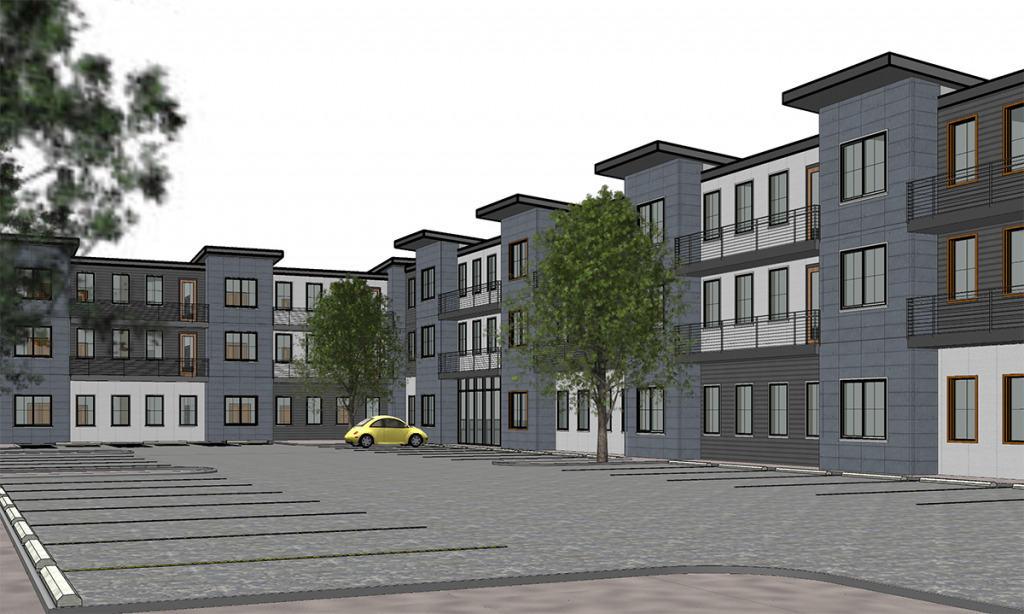 The senior housing project will feature 60 units, each with two bedrooms and two baths. (Rendering courtesy of T&H Investments)

A local developer plans to build a 60-unit senior housing project in Speedway, as part of a larger 25-acre project featuring restaurants, shopping and a hotel.

T&H Investments will spend about $13.5 million on its housing project at Founders Square, a master-planned property at the northwest corner of High School and Crawfordsville Roads. The two-bed, two-bath apartment units will occupy a single three-story building of about 73,000 square feet.

The units will provide individuals over the age of 55 “high-quality, modern housing,” said T&H President Jana Hageman. The project has been awarded Low-Income Housing Tax Credits by the Indiana Housing and Community Development Authority.

Rent for the units will range from $500 to $1,000 per month—depending on an individual’s qualifications against the area median income—with three separate percentage thresholds, although those were not immediately made public.

The units will focus on independent living, according to a news release, although some on-site aging services and programming will be available to all residents. All units will feature modern furnishings and energy-efficient appliances, like in-unit washers and dryers.

The building will also have a fitness center, a community lounge and a technology room, along with a surface parking lot of unspecified size.

Construction is set to start this fall, with completion in October 2022. Pre-leasing for the units will start next summer.

Indianapolis-based T&H specializes in low-income housing, in recent years completing a $12 million development near Garfield Park and $10 million project in the Cumberland area.

Founders Square was announced in 2020 as a partnership between the town of Speedway, Fishers-based Rebar Development and Carmel-based Hageman Group. As part of the project, the town committed to invest $5 million infrastructure improvements and site work.

“When the Speedway Redevelopment Commission started the visioning process for Founders Square, we asked the community for their input on where the gaps were in our local resources,” said Tim Gropp, economic development director for the town of Speedway. “Senior housing options was near the top of the list, and this project will provide new housing options in the town to begin to fill that gap.”

An Aldi was announced as the grocery tenant for the site in January, joining the likes of Crew Car Wash and a 127-room Hampton Inn from Indianapolis-based MHG Hotels as some of the major tenants for the Founders Square project. Additional tenants are expected to be announced later this year.