The Indianapolis Tennis Championships—formerly known as RCA Championships—appear to be dead, with the ATP Tour
dates being shipped off to Atlanta for 2010 and beyond.

Though ITC officials did not return calls seeking comment,
two sources within the U.S. Tennis Association confirmed that the USTA’s Southern Section in Georgia is buying the tournament
dates from organizers of the Indianapolis tournament. It is not clear what the terms of the deal are.

Tournament
organizers that are granted a coveted position on the ATP Tour, the top circuit for male professional tennis players, essentially
own those dates on the calendar.

The ATP does have some power to change those dates. The local tournament was
hurt in 2003 when ATP officials moved the event from August, where it was a key warm-up to the U.S. Open, to July. 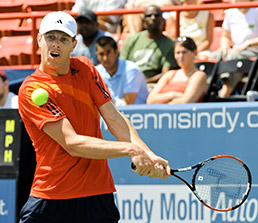 The ITC has struggled mightily in recent years, losing its title sponsor, RCA, after the 2006 tournament, along
with its television deal with NBC. Perhaps as a result, attendance and revenue have declined.

The event struggled
in recent years to meet its annual budget of $3.4 million, which covers a prize purse of about $520,000, player appearance
fees and the mounting costs of maintaining and upgrading the aging Indianapolis Tennis Center on the IUPUI campus.

A dearth of U.S. men’s tennis stars in recent years has also hurt the local tournament. Attendance declined from
the 1980s and 1990s, when the likes of Jimmy Connors, Pete Sampras and Andre Agassi were regulars and the week-long event
drew more than 90,000 spectators. In recent years, attendance fell well below 70,000.

The future
of the local tournament has been further muddied by the announcement last year that IUPUI plans to demolish
the tennis facility eventually.

ITC officials in mid-November said they were awaiting
word from a company that was pondering taking over title sponsorship of the tournament, which traces
its local roots back more than eight decades.

Officials for Eli Lilly and Co. Inc., which
tripled its sponsorship commitment since RCA pulled out, said they wouldn’t be able to commit to
the local tennis tournament financially until the first quarter of 2010.

“We’ve been busy with the
reorganization of our company,” said Lilly spokeswoman Lauren Cislak. “We’re not in a position to commit
to the sponsorship right now.”

Amid speculation the tournament was moving, an Atlanta-based marketing firm,
The Forward Agency, recently began soliciting sponsors for a new ATP Tour event this upcoming July on the dates previously
held by the Indianapolis event.

Officials for The Forward Agency did not return calls seeking comment, but an
online announcement from the firm’s owner, Jason Pritchett, advertised sponsorship opportunities for an ATP tournament
to be held at the Atlanta Athletic Club that will be televised on ESPN2 and The Tennis Channel. Both were TV partners of the
Indianapolis event in 2009. That announcement has since been pulled.

A source within the USTA said officials
for USTA’s Southern Section have been seriously negotiating to buy the dates of the local tournament since the 2009
U.S. Open in late August and early September.

Officials for the USTA’s Midwest Section in Indianapolis
said they talked with ITC executives over the last two years about taking an equity stake in the tournament to keep it here.

Mark Saunders, executive director of the USTA Midwest Section, talked to officials at the USTA’s national
office about obtaining financial aid to keep the tournament in Indianapolis, but in the end, Saunders said, with the recent
economic swoon, the Midwest Section simply couldn’t afford to invest.

Georgia and some of its surrounding
states are tennis hotbeds. The Southern Section covers nine states and has more than 170,000 members. It has greater financial
resources, USTA officials said, than the Midwest Section, which covers 5-1/2 states and has 84,000 members.

“This tournament for years was a unique drawing card for the entire state, and its absence will
put a sizable hole in the sports calendar,” said Jim Whipkey, president of the Central Indiana Tennis Association. “You
simply can’t replace the type of attention this tournament brought this region with another sporting event. If it’s
true, this is a very sad day.”

“This isn’t surprising,” said Rosentraub, who now works in the School of Urban Affairs
at the University of Michigan. “The market has spoken.”

Rosentraub, who has authored two books about
professional sports operations, said the disappearance of the ailing tournament could actually be a good thing.

“The focus right now has to be on protecting the large base assets of this community: Conseco Fieldhouse and Lucas
Oil Stadium,” Rosentraub said. “Anything that takes consumer dollars away from those assets has to be given lower
priority.

“The market in Indianapolis has become saturated. This is a contraction, a market correction.
It’s as simple as that.”

Still, it won’t be easy for tennis fans to say goodbye to the tournament,
which traces its roots back to the Woodstock Country Club in 1920. It started there as the Western Open before evolving into
the U.S. Open Clay Court Championships. That tournament, which featured men and women, became the U.S. Men’s Hardcourt
Championships and RCA Championships. The event brought some of the biggest international tennis stars to Indianapolis every
year.

From the 1980s up to 2001, the tournament was voted the top ATP Tour event by the players a record-setting
11 times. But as the ATP tweaked its schedule and promoted a summer tournament in Cincinnati to the Masters Series, the highest
rung of events outside the Grand Slam, the local tournament began to slide in prestige despite local organizers’ attempts
to obtain the same status.

“It’s been a tough situation with the event in Cincinnati,” Whipkey
said. “That took a lot of wind out of our sails. And things just started to sink from there.”•