All parents hope to teach their kids the value of money. Few end up successfully investing hundreds of millions of dollars
together.

But for a handful of top local teams, wealth management is a family affair. Each began their financial
lessons at home around the dinner table. Once the children were grown, they all evolved parental relationships into professional
ones. And their success stories speak for themselves.

Locally based Cooke Financial Group of Wells Fargo &
Co., for example, was founded in 1969 by patriarch John Cooke, 70, who started out as a stockbroker. Today, he shares the
managing director title with sons Chris, 44, and Brian, 42. As a team, they manage $1 billion for wealthy individuals.

Another local financial advisory team involves 73-year-old Jack Klausner and his son, Jonathan, 42. Founded in 1958
as part of Thomson McKinnon, the team now manages about 500 accounts totaling $700 million under the moniker the Klausner
and Duffy Investment Group at UBS. Jonathan Klausner has been working alongside his father since 1992.

The Auer
Growth Fund was organized more recently, but father Bryan Auer, 73, and his sons Bob and Paul have been managing money together
with spectacular returns for more than two decades. Starting in 1987, they took $100,000 Bryan Auer had saved in his IRA and,
by 2007, grew it into $30 million. Using their same investment formula, two years ago they launched the Auer Growth Fund,
a locally based mutual fund. It now has assets topping $159 million.

“Obviously, this isn’t something that
happens overnight. You don’t just bring your kids in, get ’em licensed and turn ’em loose,” White
said.

“You’re a bat boy, a second stringer sitting on the bench. Eventually, with practice and hard
work, you’re on the field playing.”

At all three local businesses, the father-to-son changeover is
decades in the making. 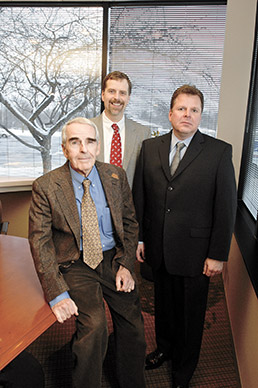 Chris Cooke remembers many mealtime discussions
growing up at home about complicated financial topics, like the difference between Ginnie Mae and Fannie Mae. And to this
day, he dreads yellow legal pads because that’s where his dad kept single-spaced lists of the chores planned for “every
Saturday of my life.”

“I woke up knowing these were the 15 things we’d do, and until they were
done, you didn’t visit your friends, watch TV or play video games. Friends would call the house to see if the chores
were done before they’d come over, or they’d be roped in,” Chris Cooke said. “You’d wake up
and learn, if I have a plan and accomplish it, there’s a reward for it. It’s a small life lesson, but life’s
like that.”

Chris Cooke began working with his father 17 years ago, after earning both a law degree and,
thanks to a stint at Ernst & Young, his CPA. His brother, a certified investment management analyst, followed about two
years later. At first, Chris Cooke remembers, his father took the lead in meetings with clients, then slowly swapped roles
until clients didn’t care which one was in the room anymore.

But to this day, Chris Cooke said, his father
provides the Cooke Financial Group an advantage many wealth managers lack: deep historical perspective. Chris Cooke can remember
running into his father’s office many times excited about a hot stock, only to be told to gather more research. After
all, who’s likely to know more about it, his father would ask, you or somebody who’s paid to spend his entire
career following the industry and regularly writes 30-page reports about it?

Jonathan Klausner recalls the day
his dad came to visit his elementary school classroom. The other kids were immediately impressed with the dads who worked
as policemen or firemen. But Jack Klausner, wearing his suit and tie, managed to equally wow them by talking about investments
in products they knew and loved, like Coca Cola. His birthday gifts would always include a couple of shares of stock, which
Jonathan Klausner then followed in the newspaper right along with the comics and the sports scores. During snow days and summer
breaks, he filed paperwork in his father’s office and played with the stock quoting machine.

Like the
Cooke boys, Jonathan Klausner didn’t join his father straight out of school. Instead, he took a job in Atlanta with
Prudential Securities. It allowed him to develop his own work ethic and habits. The experience also taught Jonathan Klausner
the value of access to his father’s book of clients. To build his own book in Atlanta, he’d had to make cold calls
across the Southeast.

There have been plenty of reminders since. Jack Klausner’s half-century of knowledge
offers a calming presence both for clients and his team in any crisis. It was particularly helpful after 9/11, Jonathan Klausner
said, and at the height of the financial crisis last year.

“To have that anchor or safety net of a mature
business behind you, it’s invaluable,” Jonathan Klausner said.

It’s a resource Klausner and
Duffy likely will enjoy for many years to come.

“He still comes in every day. He must read at least two
newspapers and maybe more. He gets on the phone, talks to clients, eats his lunch at his desk as he has the last 50 years
running, and sometime during the afternoon he makes a decision to go home,” Jonathan Klausner said. “In the summertime,
the golf course calls his name a little more often. But I don’t foresee him ever completely hanging it up.”

Bryan Auer also still comes to the office every morning, said his son Bob. Their story is unusual in that the pair
built their $159 million in assets together starting toward the end of Bryan Auer’s first career as a self-employed
sales representative for health and beauty aids.

Back in 1987, Bob Auer was proud to be working as a broker for
Dean Witter. His dad had been personally investing with middling results for years. But when Bryan Auer brought his son $100,000
in retirement money to manage, he didn’t want to rely on Dean Witter’s research.

Instead, he planned
to divide the cash into 100 blocks of $1,000, then pick stocks exclusively based on three factors: each company’s sales
must be up at least 20 percent compared with the same quarter a year ago; its profits during the same period must be up 25
percent; but the price-to-equity ratio couldn’t rise above 12. At regular intervals, the worst performers that couldn’t
keep up those metrics were discarded.

The key was discipline about when to sell. As soon as a stock’s price
had doubled, Bob Auer said, it had to leave the portfolio—even if it was hot and on its way up. If, and only if, it
still fit the original investment parameters, it could be repurchased.

Using this methodology, eight of the
chains of buys and sells traceable back to the original 100 stocks made $1 million, and two chains made $2 million. Two years
ago, Bob Auer used his father’s technique to launch the Auer Growth Fund, one of just three mutual funds headquartered
in Indiana.

“I take no credit for the system. He developed it, the screening process,” Bob Auer said.
“People, when they hear what happened, they don’t believe it. They assume you bought Microsoft and got to be the
lucky monkey.”

Due diligence on children

White, the financial services consultant,
suggests a few standard litmus tests to verify money managers’ children are as strong as their well-known fathers tout.
Sharing a last name isn’t enough to prove a son is sharp at selecting stocks or bonds. Clients should feel no qualms
about expecting him to earn formal money management education and professional designations, like the CFP or CFA, before taking
over their account.

It’s perfectly OK, White said, to ask for client referrals, preferably accounts the
son attracted and serviced on his own. And it’s always important to understand how any money manager is compensated—whether
via portfolio management fees or through a commission percentage on the investment products he sells.

In some
cases, White said, the conversion from father to son can actually produce better results. He likened it to a dentist who practices
well for half a century, then sends his son off to dental school to learn all the most modern tools and techniques.

“You think sometimes there will be a lack of experience. Then you find out that the son … [knows] procedures
and medications that will take care of you better than his father, because his father couldn’t even keep up on the literature,”
White said. “You’re not necessarily going to find a clone of the father or the mother. Sometimes it can be an
improvement.•