Gov. Mitch Daniels’ strategy to keep Indiana’s taxes low and spending tight is paying off in the form of modest
borrowing costs. 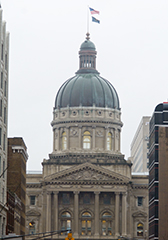 On
Jan. 21, the Indiana Bond Bank sold $300 million in Tax Anticipation Notes, the proceeds of which
will help more than 120 local government units pay their bills while they wait for their property tax receipts. Local
participants in the issue include the Greenwood Community School Corp., Indianapolis Public Schools, the Metropolitan School
District of Perry Township, Speedway Public Library and Decatur Township.

The state’s borrowing rate was 0.98
percent for one year, or the lowest short-term borrowing rate the Indiana Bond Bank
has ever offered during the 24 years of its Advanced Funding program. A year ago,
rates stood at 1.79 percent.

New York-based credit rating agency Standard
and Poor’s, which analyzed the $300 million debt issue in a Jan. 14 research
note, said there is little chance Indiana could experience problems repaying the
notes. And that remote possibility is offset by several factors, including strong bond bank oversight
and program experience with property tax delays.