Home » LOU’S VIEWS: In Defense of Rodgers and Hammerstein

I strongly considered not writing about Footlite Musicals’ “Oklahoma!” and Indianapolis Civic Theatre’s
“Carousel” this week.

That isn’t because I thought the shows themselves were unworthy of discussion. Or that the productions didn’t
engage and entertain.

Rather, it’s because I have daughters in the ensembles of each of these shows. 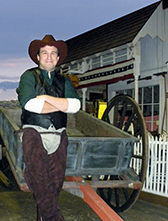 Now, the potential problems, both ethical and familial, of reviewing a show featuring one’s offspring are pretty self-evident.
But rather than dodging this Rodgers & Hammerstein double-header completely, I’d like to take the opportunity to
launch a defense of the shows themselves.

I think so. Despite the perennial popularity of their work, they are often mislabeled. There’s a commonly held belief
that their work is old-fashioned and sentimental, that these are shows that offer platitudes and easy answers, and that, by
design, they go down smoothly without any challenges to the actors or audience.

“Oklahoma!,” the first R&H collaboration, hit Broadway in 1943, offering a radical rethinking of what musical
theater—then primarily labeled musical comedy—could do. Unlike most earlier shows, where plot and character development
ground to a halt when the songs started, “Oklahoma!” featured musical scenes that were integral to the story and
our understanding of its people. Rodgers, who wrote the musical, and Hammerstein, who took care of book and lyrics, dispensed
with a big opening number, delved into the psychology of their heroine through ballet, and deftly combined humor, drama and
world-class dance (thanks to choreographer Agnes DeMille). They did nothing short of change the face of an art form.

Yes, it’s a classic and a groundbreaker. But director Eric Karwisch at Footlite clearly understands that those labels
don’t mean the show needs to be treated as if preserved in amber. Without tampering with its integrity, he’s framed
it with a bit of a vaudeville sensibility—as a show Will Parker, the second male lead, might have seen on his trip to
the bustling metropolis of Kansas City (where, if you’ll recall, “everything’s up to date”). 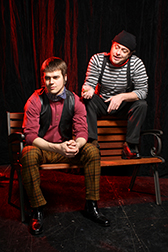 It may not have much dirt under its fingernails, but Footlite’s production has scene changes signaled by placard-posting
cuties, a trio of State Fair cloggers rousing the post-intermission audience, and age-appropriate leads. This “Oklahoma!”
is full of youthful energy. (Show me a pair of 35-year-olds as Laurie and Curly and I’ll show you an “Oklahoma!”
that isn’t going to work, no matter how polished the dancing and singing.)

Rather then rest on their success, R&H dug deeper for their next show. In “Carousel” (1945), all the doors
opened with “Oklahoma!” were torn off their hinges. Here, the leading man is a loser who can’t control his
anger, the leading lady is a co-dependent who gets the dreamer knocked out of her, and the ballet is as heartbreaking as anything
ever put on stage. Oh, and the music is spectacular, from the curtain-raising “Carousel Waltz” to the final strains
of “You’ll Never Walk Alone.” These songs blend beautifully into their scenes with lyrics that dodge, reveal,
bite, and both condemn and offer salvation to the show’s troubled characters.
“Carousel” is the opposite of sentimental. It’s raw and rough and knows full well that there aren’t
easy answers when confused, flawed humans are involved. It’s funny, too, but never in ways that compromise.

Both “Oklahoma!” and “Carousel” are about how small we are, about the value of connecting to a community,
about how clinging to an idea can bring people together or keep them from being together.

Civic’s “Carousel,” like Footlite’s “Oklahoma!,” benefits from a director (Robert J.
Sorbera) who gets that his show is relevant—that his characters aren’t archetypes. They’re living, breathing
people who don’t know what the world is going to throw at them next and, in the case of “Carousel’s”
Billy Bigelow, can’t grasp that there’s a place in this community for him. That it’s possible to change.

Even some musical-theater fans are uncomfortable with “Carousel” because they see it as justifying spousal abuse.
In the wrong hands, it can come across that way. But Julie’s “What’s the Use of Wond’rin’”
shouldn’t be taken as R&H’s statement on the way women should be. It’s one young, damaged woman’s
attempt to make sense out of her choice to stay with her husband. This and other successful productions of “Carousel”
earn a powerful payoff by making clear their understanding that people don’t always say (or sing) what they really feel.
They sometimes don’t even know what they feel.

Ultimately—and wisely—Civic’s “Carousel” isn’t concerned with whether Billy gets his
heavenly reward. It’s concerned with showing that, no matter what comes next for him, Billy realizes he has—by
his own choices—screwed up the chance to be in the lives of his wife and child. His final sigh as he takes a last look
at what he has lost is as strong a moment as I’ve seen on Civic’s stage, capping a show that once again made clear
that “Carousel” was—and is—a masterpiece.

And I’d say that even if my daughter weren’t in it. Although, since she is, I have one more reason to see it
two or three more times before it closes.•