Home » Miller brothers who shared in fortune fighting over $3 million

J. Irwin Miller’s two sons can agree on one thing.

Their years-long dispute over who should have paid expenses on the wealthy Columbus family’s homes and businesses isn’t
about the money.

For the past three years, elder son Hugh Miller II has waged a legal battle over $3 million in spending. He’s continued
the fight, even after he and his four siblings inherited at least $20 million apiece.

Hugh’s attorney says he’s pursuing the case, now before the Indiana Court of Appeals, on the principle of protecting
his mother’s interests. Attorneys for Will Miller, an Indiana banker, say Hugh’s complaints stem from a grudge.

The Miller children are heirs to a family fortune built on real estate, starch and banking, and which funded the founding
of diesel-engine maker Cummins. Their father, who died in 2004 at age 95, served as chairman of both Cummins and Irwin Financial
Corp., parent of the now-defunct Irwin Union Bank.

J. Irwin and his wife, Xenia, who died in 2008 at age 90, also built an international reputation as patrons of modern art
and architecture.

Will and longtime family financial adviser Sarla Kalsi of Columbus jointly managed the couple’s estate under power
of attorney after J. Irwin died, but Xenia was still living.

During that 3-1/2-year period, the estate spent $21.2 million. Hugh contests a small portion of that spending, $2.7 million,
which went toward maintenance of the Irwin Home and Gardens in Columbus, a 570-acre vacation property in Canada, and Xenia’s
Columbus residence.

“It’s a matter of principle,” said Kathleen Hart, Hugh’s attorney at Bose McKinney and Evans in Indianapolis.
“He felt like someone had to stand up for his mother, who was incompetent.” (Xenia suffered severe dementia, according
to a 2007 physician’s note.)

Hugh claims his brother had Xenia pay for things that provided no direct benefit to her. He wants
Will and Kalsi to personally repay the estate, plus interest.

“What really brings this matter to court appears to be the psyche of Hugh Miller,” Richard Smikle, an Ice Miller
attorney representing Will Miller, wrote in a trial court pleading. “[He] has transferred his resentment over his poor
relationship with his father into harboring an ill will towards his younger brother, with whom his parents had a much better
and more trusting relationship.”

Will Miller, 54, the only one of the five children who lives in Indiana, was not available for comment. He succeeded his
father in the family banking business in 1990 after working on Wall Street.

Irwin Financial, which had gone heavily into the subprime lending market, filed for bankruptcy liquidation last year after
regulators seized and sold off its banking assets. Will is now chairman of Irwin Management Co., set up more than 50 years
ago solely to manage the extended family’s assets.

Kalsi, CEO of Irwin Management, has worked for the family 42 years.

Hugh, who is five years older than Will, lives in Lake Angelus, Mich. Hart said he hasn’t worked “for a while,”
but formerly was employed by Electronic Data Systems, the company Ross Perot founded and sold in 1984 to General Motors.

The three Miller sisters, all older than Hugh and Will, live on the East Coast.

Kalsi noted that Hugh is the only sibling who contested her and Will’s actions.

“I have no way of knowing what the motivation is,” she said.

The financial benefit would be slight, relative to the Miller children’s inheritance. Xenia’s net worth was estimated
at $195.8 million at the time of her death on Feb. 19, 2008. After a 50.5-percent death tax, that left roughly $20 million
for each child.

“We have not lived and worked primarily to maximize your inheritance any more than our ancestors lived and worked to
maximize our inheritance,” Miller wrote in a 1996 letter to his children that outlined his estate plan. “We have
worked and lived to make a constructive contribution to our community, church, and nation.”

At the time, Irwin wrote that, he, Xenia and his sister Clementine Tangeman had combined assets of $173 million. By that
point, they had given more than $162 million to charity.

Among the Millers’ holdings were real estate, stock in Cummins and Irwin Financial, and an art collection that included
works by Monet, Picasso and Matisse.

The collection was valued at $142 million after Xenia’s death. Christie’s of London auctioned 17 works that summer,
and a Monet water lily painting, “Le basin aux nympheas,” fetched $80.4 million, a record for the artist.

Famed modern architect Eero Saarinen designed the Millers’ home at 2760 Highland Way in 1957. It was donated to the
Indianapolis Museum of Art after Xenia died. 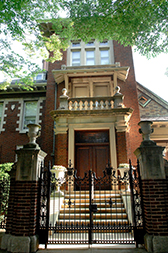 The former
Irwin home at 608 Fifth St. in Columbus, Ind. Maintenance expenses for this and other properties are being disputed in court.
(IBJ Photo/ Perry Reichanadter)

The Millers and Tangeman also maintained the Irwin Home and Gardens, where J. Irwin and his sister were raised, and “Muskoka,”
a compound on Ontario’s Lake Rosseau that includes four houses and four boathouses.

J. Irwin wanted his children to appreciate their legacy and family traditions.

The Miller children began discussing at least two decades ago how they would manage Muskoka once they inherited it from their
parents and Aunt Clementine.Differences surfaced back then.

“As you can imagine, it was not a pleasant process,” Hugh wrote in a 1991 letter to his parents. “We have
unfortunately arrived at a point where the discussions have irreparably broken down.”

Hugh proposed carving off a piece of the property for his own family’s use, and to avoid future conflicts. “Kate
and I have read about the problems of other families in similar situations, just as you have. We want to insure that these
do not happen in this family.”

In a letter to all five children the following year, J. Irwin urged them to cooperate. The extended family had been vacationing
in Muskoka for 80 years.

“I call to your attention that we have during all this time treated it as a ‘spiritual’ investment,”
he wrote. “We have never divided it up.”

Ultimately, Muskoka was placed in a trust, which requires each member to contribute to its expenses, or lose the privilege
of using it.

The ongoing legal contest began in 2007, when Will and Kalsi voluntarily filed with the Bartholomew Superior Court
an interim accounting of their activities as representatives of Xenia’s estate.

Hugh initially disagreed with the estate’s paying for the maintenance costs—which averaged $225,000 a year—and
taxes on the Irwin home because it actually belonged to Will.

Will Miller bought the Italianate mansion from his aunt’s estate in 1999 for $906,705, but he didn’t live there.
His parents had asked him to make the purchase because they wanted to keep it from passing to a private foundation, which
would prevent them from using it as a family guest house.

J. Irwin and Xenia agreed to pay the taxes and upkeep. Hugh argued Will should have stopped that practice when he began acting
on his mother’s behalf to avoid self-dealing. (Will sold the house last year to a couple who operates an inn. The purchase
price was $1.25 million, according to The Republic of Columbus.)

Will argued that spending on the Irwin home benefited the whole family—including Hugh. He also argued that he and Kalsi
also had the right, under power of attorney, to spend as Xenia would have.

Details of the back and forth contribute to voluminous court filings. Hugh’s attorneys filed a 21,000-word appeals
brief, accompanied by a five-volume appendix.

On top of the specific amounts spent on real estate, Hugh thinks Xenia was cheated out of an unknown sum in 2004 when Will
withdrew her as a partner in IMC Advisors, a Columbus financial-management firm.

J. Irwin and Xenia helped form the company in 2001 so Kalsi and another longtime Irwin Management employee, Donald Michael,
could take on new clients and earn a living after the Millers died. Kalsi ended up withdrawing as a partner in 2008 to focus
on wrapping up Xenia’s estate.

The problem, attorney Kathleen Hart said, is that Will and Kalsi also were co-trustees of the estate. In that role as fiduciaries,
they should have questioned their own spending, she said.

Hart also says the relatively small sums in question should not matter to the court.

“The law doesn’t say you can spend all you want, as long as the person you’re protecting can afford it,”
she said.

Bartholomew County Judge Chris Monroe sided completely with Will and Kalsi in his Nov. 16 order. He adopted their attorneys’
proposed order, which concluded, “Ordinary financial or legal analysis cannot be used as the sole benchmark to measure
such extraordinary people or the acts of those who attempted to act in their place.”

Monroe also ordered Hugh to pay the other side’s attorney’s fees from November 2008 forward. Those total more
than $234,000.

“Proceeding in litigation on the basis of whether or not something passes a ‘sniff test’ is not a good-faith
basis for litigation,” he said.

Indiana University law professor Don Gjerdingen thinks it will be “exceedingly difficult” for Hugh Miller to
succeed in his appeal. The main legal issue, he said, are actions taken under power of attorney, which are much less limited
than a traditional trusteeship.

Most contests surrounding inheritance and estates aren’t about the money, Gjerdingen said.

“They’re about the family dynamics,” he said. “It’s easier to blow up after somebody’s
gone.”•