When it comes to dining, it’s difficult to go wrong when top chefs combine the best ingredients. That doesn’t, however, mean every combination of those ingredients is going to come out tasting identical.

The same holds true for multi-performer events. Take, for instance, “An Evening with the Stars” Indianapolis City Ballet gala, which was presented at the Murat Theatre Sept. 11.

This year’s event blockbuster used the same formula as the one from 2009—bringing some of today’s greatest young dancers from some of the most prestigious companies in the world to town to do what they do best. The show, once again, mixed traditional ballet work with more contemporary choreography.

But it was a very different show. Still excellent—but different. In this case, the traditional won out over the contemporary. We were the privileged witnesses of the best of an art form, rather than being offered a peek at its future.

The evening kicked off with a world premiere. 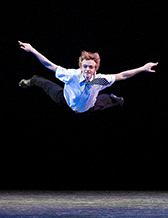 “Effortless” is a term bandied about often with artists, but the term applies to Boston Ballet’s Misa Kuranaga and ABT’s Daniil Simkin. Their “anything you can do” competitive energy highlighted the pas de deux from “Le Corsaire.” Simkin returned in the second act for one of the show’s only solo pieces, set to Jacques Brel’s “Les Bourgeois.” If they ever cast “Harry Potter: The Ballet,” this guy is a lock for the part.

Dance closer to—but not too near—the edge was represented by Elisa Carrillo Cabrera and Mikhail Kaniskin of the Berlin Ballet, and it shouldn’t be held against them that their outstanding work didn’t have the fire of last year’s Stuttgart Ballet duo. Their “Kazimir’s Colours,” in which the passive-aggressive Cabrera seems to want to escape, but not get too far from, Kaniskin, was highlighted by magnificent leaps—often with Cabrera landing on Kaniskin’s back.

They followed in Act Two with Michael Forsythe’s 1987 groundbreaker “In the Middle Somewhat Elevated,”

which felt more like a landmark than a look forward. But when will the dance students in the audience—and the rest of us—ever get a chance to see the piece performed this well?

Yuan Yuan Tan and Damian Smith offered a moving meditation on grace and dependence with the pas de deux from “The Fifth Season,” returning later for Edwaard Liang’s “Distant Cries,” in which not-quite-matching couples—clear from the dancers’ angles and attitudes—struggle with intimacy and pain. It offered perhaps the evening’s most memorable imagery.

ABT’s Julie Kent and Marcelo Gomes—joined by accomplished pianist Emily J. Wong—served to fill the narrative slots in the program, closing the first half with “Lady of the Camellias’” third act pas de deux and bringing a strong sense of danger and dread to Lar Lubovitch’s “Othello” in the second. 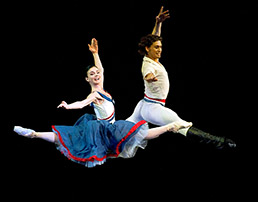 The stars among the stars this time out, though, were Natalia Osipova and Ivan Vasiliev of the Bolshoi Ballet. Let’s just admit it: There’s a show-off quality to some of the best in just about any field. There’s no shame in the fact that great dancers can awe us for some of the same reasons slam-dunking basketball giants can: Thanks to training and talent and more training, they can do things we cannot. They represent an ideal and in them we see and marvel at human potential.

So if Vasiliev seemed a little full of himself, so be it. There’s something superhuman in his airborne twists, seemingly endless leaps, and, “You think that was something, wait until you see this” moves. And Osipova provided just the right charming counterpoint. With a Leslie Caron-like spirit and technique to burn, Osipova never let the audience forget that the stage belonged as much to her as to her masculine partner.

And there was Miguel Quinones, featured in the only returning piece from last year’s gala. Dave Parsons’ “Caught” is dance but also something way beyond. This time, the precise timing and soul-grabbing yearning took the audience less by surprise, but the result was six unforgettable minutes that celebrated not just the dancer and the choreographer but also, somehow, all the things we think are impossible.

The exciting and seemingly endless variations the show provided remind us that ballet still has the power to surprise and thrill.

Here’s hoping that what happened on stage on the 11th inspires the Indianapolis City Ballet to continue its goal of bringing—and creating—excellence. And that the dancers in the audience see that their art can be vital, moving, powerful, fun and important all at the same time.•