Home » GM to pay more than $400 million in worker bonuses 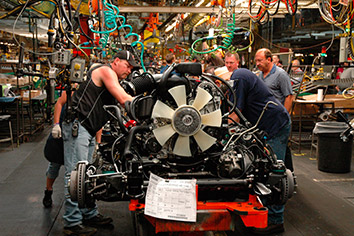 Less than two years after entering bankruptcy, General Motors will extend millions of dollars in bonuses to most of its 48,000 hourly workers as a reward for the company's rapid turnaround after it was rescued by the government. About 700 workers at GM's Components Holdings' operation in Kokomo could receive as much as $3,000 each.

The payments, disclosed Monday in company documents, are similar to bonuses announced last week for white-collar employees. The bonuses to 76,000 American workers will probably total more than $400 million — an amount that suggests executives have increasing confidence in the automaker's comeback.

In the four years leading up to its 2009 bankruptcy, GM piled up more than $80 billion in losses and was burdened by enormous debt and costly labor contracts.

"On the whole, we made tremendous progress last year," CEO and Chairman Dan Akerson said Monday in an e-mail message to employees announcing the payments. "With our collective teamwork, this can be just the beginning."

The company made $4.2 billion in the first nine months of 2010 and is expected to announce a fourth-quarter profit soon.

Most of GM's hourly workers will get a record payment of more than $4,000 — more than double the previous record in 1999, at the height of the boom in sport utility vehicles and pickup trucks. Nearly all 28,000 white-collar workers such as engineers and managers will get 4 to 16 percent of their base pay. A few — less than 1 percent — will get 50 percent or more.

Bill Selesky, an auto industry analyst with Argus Research in New York, called the recovery "dramatic" and said the payments were needed to stop talent from jumping to other automakers, especially crosstown rival Ford.

The company, he added, is also trying to send a message: "It's the new GM."

But the bonuses drew criticism from an opponent of the auto industry bailout in Washington who said GM should repay its entire $49.5 billion loan before offering bonuses.

"Since the taxpayers helped these companies out of bankruptcy, the taxpayers should be repaid before bonuses go out," said Republican Sen. Charles Grassley of Iowa. "It sends a message that those in charge take shareholders, in this case the taxpayers, for a sucker."

The government has been repaid $23 billion but needs $26.4 billion more to recoup its whole investment. The government still owns 500 million shares of GM common stock, which would have to sell for roughly $53 per share to get all the money back.

The GM documents show that the company plans to pay hourly workers at least $189 million in bonuses next month. About 45,000 workers at GM factories will get more than $4,000 each. Another 3,000 workers at old parts plants that GM is trying to sell will get $3,000 each.

The company would not say how much the white-collar bonuses will cost, but calculations made by The Associated Press show the total will probably top $200 million.

Most GM salaried workers earn in excess of $100,000 per year. A bonus of 8 percent, the midpoint of the range, would give them roughly $8,000 each. That means GM would pay out roughly $224 million.

Final numbers for the bonuses will not be calculated until after the company announces its fourth-quarter and full-year earnings from 2010 later this month.

Chrysler, which needed a $12.5 billion bailout, plans to pay bonuses as well. The government owns about 9 percent of Chrysler stock.

The size of the white-collar bonuses could become an issue later this year when the Detroit Three begin contract talks with the United Auto Workers union. The master contract with all three companies expires in September.

Joe Ashton, the UAW vice president dealing with GM, joined a GM labor relations executive in signing a message to workers saying that the payments are a good example of how union members are sharing in the company's success.

"We know that 2011 is an important year for both the UAW and GM with contract talks approaching," the message said. "We look forward to getting a contract that is beneficial to both employees and the company."

The payments follow GM's surprising return to profitability last year. The company emerged from bankruptcy cleansed of most of its debt and burdensome contracts and has shown it can make money even in a depressed auto market. Consumers bought only 11.6 million cars and trucks in the U.S. last year, far below the peak of 17 million in the middle of the last decade.

The GM documents say the white-collar bonuses are based on operating cash flow, earnings before interest and taxes, and global market share. This year, the company plans to add vehicle quality to the formula, measured by warranty claims and rankings from Consumer Reports magazine and J.D. Power and Associates.

GM has said its top 100 earners are still covered under government pay restrictions. Cash salaries have been capped at $500,000, but further compensation can be made in stock. Many of the executives still will take home more than $1 million.

Chrysler's roughly 22,000 blue-collar workers were to get $750 in bonuses even though the company lost $652 million last year. It expects to post a net profit this year after revamping its aging model lineup. Chrysler's salaried workers also were to get bonuses, but the amounts were not disclosed.

Ford Motor Co. announced plans last month to pay its 40,600 U.S. factory workers $5,000 each, the first such checks since 1999. The Dearborn, Mich., company, which avoided bankruptcy and did not get a government bailout, made $6.6 billion last year.

Ford also plans to pay performance bonuses to white-collar workers in lieu of raises, but it would not reveal the amounts.

At GM, the bonuses also did not sit well with a former stockholder whose small investment was wiped out in the bankruptcy.

"There's nothing left for the shareholders, but the people that continue on, I guess they're doing OK," said John Chevedden, 65, of Redondo Beach, Calif., who often complained about GM management at the company's annual meetings. "The shareholders are really taking the brunt."