The city of Indianapolis took title to the 1,600-space former Bank One parking garage in February 2010 and paid off a property tax balance of $369,500, sweeping the downtown garage off county tax rolls.

But more than a year later, the city has not settled on a purchase price or made any payments for the building at 101 N. New Jersey St. The seller continues to manage the garage and collect its revenue. The parcel remains exempt from property taxes.

The arrangement is just one peculiar detail in a complex redevelopment deal the city is poised to close after three years of twists.

The project already has cleared more than its share of obstacles: The mortgage-holder on the garage threatened to foreclose and scuttle the deal. A lender backed out, leaving the city to scramble for an alternative. The city discovered a contract jeopardizing a key deal selling point—control of hundreds of parking spaces seen as critical to redevelopment on the former home of Market Square Arena.

The delays may have cost the city in property tax revenue, but they also led to a better deal on the garage itself. City officials say the purchase price for the parking garage and the adjacent former Bank One Ops Center likely will be $14.5 million—$4 million less than laid out in the original 2009 deal.

Deputy Mayor Michael Huber calls the project an economic development two-for-one: an opportunity to clean up the vacant office building and attract hundreds of new residents to support commercial redevelopment of the MSA site.

The city would keep the garage but turn over the Ops Center to locally based Milhaus Development and Gene B. Glick Co.

In exchange for free-and-clear control of the rundown office building, a 10-year tax abatement and a subsidized deal for 600 parking spaces in the garage, Milhaus and Glick would build The Residences at 451 E. Market St.

The $30 million first phase calls for 258 apartment units and first-floor retail space. They hope to break ground later this year—if the deal ever closes.

The owner of both the garage and Ops Center—a company controlled by Columbus, Ohio-based Smoot Construction—transferred the garage to the city and the Ops Center to the developers on Feb. 25, 2010.

The closing date was supposed to be just a few days later, said Maury Plambeck, director of the Department of Metropolitan Development.

But the city didn’t want to wait to transfer the property for a couple of reasons. For one, mortgage holder PNC Bank was threatening to foreclose, Huber said. Smoot was not paying its mortgage bill or property taxes. And as tax bills piled up, PNC saw its potential recovery shrinking.

City officials feared a private investor could take control of the garage during foreclosure proceedings and kill the redevelopment deal. They feared an owner like Armand Lasky, who holds the parking garage under Pan Am Plaza and has been blamed for killing redevelopment efforts for that property.

Another advantage of taking title to the garage in February was the city could avoid paying 2011 property taxes on a building soon bound for public ownership, Huber said. Tax bills are calculated in March.

Macquarie wasn’t using the spaces, but its contract could have prevented the city from offering parking to propel redevelopment of MSA, said Deron Kintner, executive director of the Indianapolis Public Improvement Bond Bank.

Smoot renegotiated with Macquarie, reducing the number of spaces potentially set aside for Chase Tower to 200. Meanwhile, the city argued the tied-up spaces reduced the value of the garage and negotiated the lower purchase price, Kintner said.

“It’s been a moving deal for three years,” he said.

The original deal approved by the Metropolitan Development Commission in June 2009 called for the city to pay $18.5 million for the garage, on an installment basis. 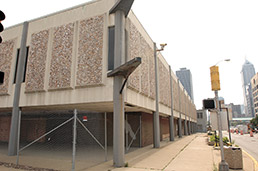 The former Bank One Operations Center has become an eyesore on the eastern edge of downtown. A redevelopment project has encountered challenges. (IBJ Photo/ Perry Reichanadter)

The developers, led by Milhaus principal Tadd Miller, agreed to take out a loan from Regions Bank for the same amount, and the city would make the payments over 20 years using garage revenue.

The deal also called for Milhaus to buy back 600 spaces in the garage over 20 years by repaying $6.6 million in tax abatements and pitching in additional payments to the city totaling $2 million.

When Regions backed out of the deal, the Indianapolis Bond Bank stepped in.

The Bond Bank is trying to sell “participation rights” in a garage loan that offers only the revenue from the garage as collateral, but turmoil in the municipal bond markets has made it a tough sell, Kintner said. The loan would still be to Milhaus and be secured by the city’s payments.

If the deal does not close, the garage would go back to Smoot. The company would not be responsible for repaying the property taxes it has avoided, Kintner said.

The Ops Center property also has a tax bill, about $259,600, said Brenda Erbse, director of data analysis for the Marion County Assessor’s Office. But the developer will be responsible for paying off the balance, city officials said.

That may be the next hurdle for the troubled project: The property could go to a tax sale if the deal doesn’t close by May, when the delinquent tax bill is due.

If the deal does not close, the tax bill would be Smoot’s obligation.

The numbers on the Ops Center project have been a moving target.

The garage sales disclosure notes the specified sales price has not been paid and that it won’t be until “certain conditions of the sale are satisfied.” The document also references a land contract that has not closed.

The reported sales prices have changed several times through the negotiations, Kintner said, and now more closely resemble the original agreement in which the developer gets the Ops Center at no cost.

Purdue University professor Larry DeBoer, who studies state and local public policy, hasn’t heard of another deal like it.

“It just sounds like a clever way to subsidize development,” he said. “Maybe they didn’t think the usual tools were available. It looks like someone has been working overtime to get it done.”

Tadd Miller said he’s never understood the point of sales disclosures because they “never explain what’s actually going on with a transaction.”

He’s just sitting tight for now, ready to get started.

“My price is settled,” Miller said. “I’m trying to stay out of the middle.”

Deals that are good ones for taxpayers as well as developers should be simple enough to explain in terms everyone can understand, said Pat Andrews, a former vice president of the Marion County Alliance of Neighborhood Associations.

The Ops Center deal does not fit that bill, she says.

Andrews questions whether the city’s move to take title to the garage is even legal. A June 2009 resolution by the Metropolitan Development Commission authorized the purchase of the garage “conditioned upon the negotiation and execution of a project agreement.” No agreement had been signed by press time.

City officials say they won’t pay anything toward the garage until they finalize the project agreement, in accordance with the resolution.

Another concern among critics of the deal: Appraisals the city used to justify a garage purchase price up to $18.5 million contemplated “future value” instead of present value, and the value equation assumed the closure of the gravel surface parking lots on the former home of MSA. Plans now call for those lots to be paved.

That shouldn’t change the ultimate value of the garage since the city’s plan remains to redevelop the MSA lots, said Bruce D. Donaldson, a partner at Barnes & Thornburg LLP who has represented the city on the Ops Center deal.

“An appraisal is a snapshot in time,” he said. “You’re never going to have the exact circumstances on the day of appraisal as the day of closing.”

Donaldson also contends the city does not need to seek another vote on the project from the Metropolitan Development Commission, even though the project term sheet includes a deadline of July 2009 to close on the project agreement. The term sheet also includes several references to Regions, which is no longer involved in the project.

“As long as we stay within the financial parameters, it doesn’t matter who the lender is,” Donaldson said.

Andrews isn’t convinced. She figures most taxpayers won’t be thrilled to learn Smoot is getting “special treatment” on taxes because the deal is in limbo.

“They invented the smell test exactly for things like this, and it doesn’t pass,” said Andrews, a Democrat who writes the blog Had Enough Indy and is running for City-County Council.•