Home » Companies seek equity in return for services to startups

A crop of Indianapolis companies is embracing the practice of developing and marketing products for startups in exchange for an ownership stake.

Sometimes, the equity is in addition to cash. Sometimes, it’s in lieu of it. 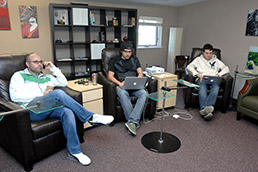 The concept is a throwback to the olden days of bartering and the early days of venture capital, when cash was scarce. And it’s increasingly becoming part of the funding landscape for local early-stage technology firms.

And in the last two years, two firms have cropped up to take the idea a step further. Developer Town, a software developer on Indianapolis’ north side, uses the model as standard practice, taking part cash, part equity to build Web-based software and mobile applications.

Bloomington-based SproutBox takes only equity from its hand-picked startup clients, affectionately called sprouts, and has a pool of investors who fund its ongoing operations.

“Taking equity has been the plan B when companies couldn’t get cash,” said Brad Wisler, a co-founder of SproutBox. “For us, taking equity is plan A.”

The benefits of such arrangements differ, depending on the service provider and the deal structure. But the basic motivation is the same. By trading work for equity, the parties ensure they’re working for the same goal: that the startup will be successful and everyone will cash in.

“There’s nothing like owning a piece of your client’s company to make sure that incentives across the board are well-aligned,” said Kristian Andersen, president of Kristian Andersen + Associates, who likens so-called “sweat equity” to performance-based pay. “Success in business is all about the proper alignment of incentives.”

But the setups also come with drawbacks, including, chiefly, the risk that a startup goes belly-up and the companies get no reward for providing resources.

Nationwide, the sweat-equity concept isn’t as widely practiced as it was in the early 1990s, before the dot-com bubble.

IBJ.COM EXTRA
For a look at the firms, click here.

Back then, “the risk seemed much lower to provide sweat equity,” said Don Aquilano, a managing partner at locally based Allos Ventures, which invests in growth-stage tech startups. “The perception was, an institutional-investment round or a lucrative exit was right around the corner.”

In the time since, startups have come to be seen as less sure bets, which makes fewer companies than in the dot-com days comfortable taking equity instead of cash.

At the same time, though, a wave of other factors has pushed some savvy investors toward the approach.

For one, there’s a need for seed-stage capital in Indianapolis, so companies providing services without requiring that companies pay cash help fill that gap.

A changing entrepreneurial environment in Indianapolis also has opened the door, said David Castor, a partner with Alerding Castor Hewitt.

“The newer culture is centered around working together,” Castor said. “There’s a lot of interest in getting involved at a deeper level with one another and helping companies develop good business models.”

Local sweat-equity investors say their approach has advantages over a more traditional method to building companies.

Standard practice typically involves startups’ raising cash and deploying it to hire employees or contract with firms to do the work.

One of the downsides of that approach, Wisler said, is that larger sums of cash from venture firms often come with time lines. That can pressure companies to spend the money quickly and waste resources.

By contrast, SproutBox pushes its companies, once they have a viable product, to churn revenue before launching additional fundraising.

Reducing investor pressure also helps from a technological standpoint, said Michael Cloran, CEO of Developer Town. Because his developers aren’t under the gun to produce a viable product to prove the idea to investors, they can let customer feedback drive their design process. That makes a more technologically sound result.

“Our whole structure was built to say, ‘Listen to customers,’” Cloran said.

Dmitri Vietze, who owns Beat Magnet, a Web-based application for music journalists, said he was drawn to the concept to ensure he had a technologically sound product.

With his existing business, a music PR firm, he’s contracted with software developers—at top dollar—and found himself having to pay them more to go back and fix mistakes.

In starting Beat Magnet, SproutBox’s most recent sprout, Vietze wanted to avoid that expense and redundancy.

“I can own it all and fail, or own most of it and succeed,” said Vietze, who lives in Bloomington. “My risk was lowered significantly by having a vested technology partner.”

As Andersen points out, typically, the only way for a service-based business to generate more revenue is to bill more hours. Sweat equity allows companies another avenue for doing that.

But if the companies don’t pan out—and a majority of startups don’t—the firms have expended time that otherwise could have been used to benefit cash-paying clients.

That’s what makes the deals a high-risk proposition.

The lack of strict time lines seen in a more traditional venture-capital model also means the deals that are successful can take longer to hatch. And that can make it harder for such companies to raise money, which in turn can make it tougher for the companies to thrive.

“You have to have a balance sheet in order to have the patience for these startups to bear fruit,” Aquilano said. “The company has to bear the burn of those resources until these [startups] bear fruit, and that could be years.”

Service providers that lack investment savvy also face the risk of getting less than their fair share for their work if the company’s valuation isn’t done properly. In some cases, the two parties strike a deal, then later the structures have to be reworked when a traditional venture capital firm gets involved.

Properly structuring a deal “requires legal documents, due diligence—neither the new venture nor the service provider does that for a daily living,” said Bob Compton, a veteran angel investor who was active in Indianapolis before moving near Washington, D.C. “Frequently, they don’t do it in a way that’s in the best interest of all.”

That’s less of a concern for the local outfits, which have experienced investors involved.

It’s still unclear, however, whether the firms’ bets will pay off.

The deals so far are too young to have produced a big payoff from an exit. But on the other hand, all their projects remain viable.

And the promising growth shown by some of the service providers suggests there’s ample demand for their services.

Developer Town, for example, started with three employees when the firm opened in a 3,600-square-foot space at Park 100 in October 2009.

Now the company boasts 16 employees and is cramped in the space. Developers work in miniature houses that can be moved together so the teams can collaborate on projects.

This summer, Developer Town will move to 17,000 square feet in south Broad Ripple. Cloran said the firm plans to grow its work force to about 30.

Those involved in sweat equity acknowledge the potential pitfalls. But many also believe it’s less of a gamble than other kinds of investing, including buying stocks. Even compared with angel investing, the level of involvement in shaping a startup’s fate is deeper, Andersen said.

“The greater risk is not taking any risks,” he said. “I’d much rather invest in a startup that I can influence.”•