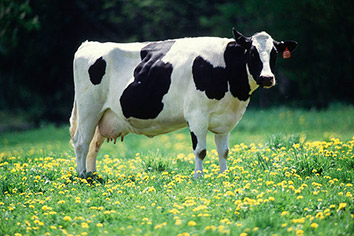 One of the nation's largest dairy cooperatives plans to tap a plentiful energy source—manure from the farms' cows—to power its fleet of milk-delivery trucks.

By early next year, Fair Oaks Farms in northwestern Indiana plans to have 42 new delivery trucks running on compressed natural gas created by harnessing microorganisms to turn the cows' manure into biogas.

The new project supported by federal and state grants will take the technology further, upgrading one of those digesters to turn the biogas into nearly pure methane and compressing it to fuel new natural gas-powered trucks that will replace diesel-power models.

The new fleet will be capable of hauling more than 300,000 gallons of milk each day to processing centers in Indiana, Kentucky and Tennessee.

"The cows making the milk will be helping delivering it too," said Mark Stoermann, project manager for Fair Oaks Farms.

To help extend the trucks' range between fill-ups, they will be outfitted with extra natural gas tanks purchased with a $2 million U.S. Department of Energy grant.

A separate $750,000 state grant will support construction of two fueling stations along Interstate 65—one at Fair Oaks, which is about 70 miles south of Chicago, and one nearly 220 miles away in Sellersburg, near the state's southeast border with Kentucky. The Fair Oaks station will supply renewable gas derived from manure, while the Sellersburg station will deliver regular natural gas.

Stoermann said Fair Oaks expects to feed enough surplus renewable natural gas from its operations into a pipeline near the farms to more than compensate for the gas its trucks get in Sellersburg.

A handful of California dairy farms produce methane from manure and compress it for use in powering tractors, trucks and other machinery. But that equipment is used primarily on those farms, said Jerry Bingold, director of renewable energy at the Innovation Center for U.S. Dairy, a dairy industry group founded in 2008.

Fair Oaks' broader plan appears to be a first for an American dairy, he said.

"They're actually moving from localized on-dairy use to really long-haul application, which is a significant move for the industry," Bingold said.

About 150 U.S. dairies use anaerobic digesters to process manure and produce power. Bingold said the industry hopes that by 2020, about 1,300 dairies will be using digesters to either generate electricity or make compressed methane.

While U.S. dairies are beginning to realize the potential of manure-to-methane technology, Bingold said agricultural lending institutions still are being sold on the technology's potential, just as other renewable energy sources received slow acceptance.

"We're developing a business model around digester operations that's going to take lessons learned from the wind and the solar industry to really build this industry," Bingold said.

About 2,600 dairy farms and 5,500 hog farms are good candidates for the technology, according to the federal AgSTAR program— a partnership among the U.S. energy and agriculture departments and the U.S. Environmental Protection Agency that's promoting manure-to-methane technologies.

Those more than 8,000 farms have the potential to produce 13 million total megawatt hours of electricity each year, or enough to power about 870,000 households. Or, the same farms could instead produce some 150 billion cubic feet of renewable methane that would be enough to heat 3 million households, AgSTAR national program manager Chris Voell said.

The nation harnesses less than 2 percent of its potential for renewable methane, Voell said. But he said farms, restaurant chains and big food processors are slowly recognizing that the organic waste they send to landfills or otherwise discard can be turned into power to help their bottom lines.

"The energy policies in this country are in some cases still running to catch up with all of the opportunities out there," he said.