Loon Lake Lodge may be gone, but its faux-rustic atmosphere lives on.

Housed in the former Adobo Grill spot, the first Indy location for Butte-based chain MacKenzie River Pizza Co. (4939 E. 82nd St., 288-0609) is nowhere near a river. In fact, the creek visible from the patio only serves to mock the place’s name. Still, few local eateries have anything in the way of scenic beauty visible, so that’s neither here (in a strip center) nor there (in the Montana wilderness). 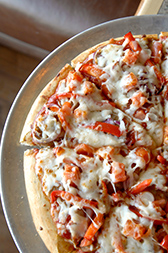 The choice of crust is yours at MacKenzie River Pizza Co., which opened its first Indy location on 82nd St. (IBJ Photo/ Perry Reichanadter)

Beyond the pizza, the Buffalo Chicken Mack n’ Cheese ($9.75) featured watery sauce, blue cheese crumbles and minimal fajita chicken pieces. The Willow Creek sandwich ($9.25) fared better with a warm combo of turkey, bacon, avocado, spinach, tomatoes and mozzarella cheese. Other choices include a Pulled Pork Hoagie ($9.25) and a Meatloaf Melt ($9). The latter is also available as the centerpiece of an entrée ($12.50). Those ambitious enough for dessert can pick from Mud Pie, Cheesecake, Warm Apple Cobbler or a plate of gooey chocolate chip cookies. Those feeling touristy can pick up a T-shirt, hat, pint glass or salad dressing. We just picked up our sizable leftover boxes.•