A local artist is crying foul over a decision to replace his work with advertising at the Indianapolis International Airport.

James Wille Faust received notice in late July that his piece, "Chrysalis," would be removed from a bulkhead wall that overhangs a busy escalator in the midfield terminal by Aug. 16, his wife and business manager, Martha Faust, said Tuesday morning.

James Faust declined the airport's offer to have him modify and move the piece to the Indiana Convention Center. "It's bastardizing his piece, No. 1," Martha Faust said of the suggestion. "It was never meant for any space other than that wall." 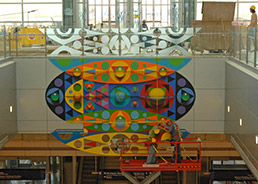 Shown here during installation, "Chrysalis" will be replaced with digital art and advertising. (IBJ file photo)

The airport will remove "Chrysalis" by the end of August, said Carlo Bertolini, spokesman for the Indianapolis Airport Authority. He said the video display of digital art and advertising will go up next month.

The video art/digital advertising unit replacing "Chrysalis" is the only one planned at the terminal, at least for now, airport officials said. Officials said they didn't know how much the wall would generate in advertising revenue.

Airport officials in recent years have been working harder to generate more revenue and slash expenses amid the stagnant economy that brought a downturn in air travel starting in 2008. That's the same year the airport opened the new passenger terminal that included a highly touted $4 million collection of public art by 17 commissioned artists and six poets.

Faust won't be the only artist to see his work moved or replaced. Airport officials said they determined from the start of the public art program that work  eventually would rotate. Bertolini said that policy was disclosed in the contracts with the artists.

“It’s part of the natural evolution of our art exhibits,” he said.

Martha Faust said she and her husband had a different impression. James Faust was eager to do the project, even at a reduced commission, because he thought his piece would hang in a prominent location for at least a decade.

"They got a lot of good will and good publicity on the backs of the artists," she said of the airport.

The airport paid $150,000 for the piece, which took three years of planning and building, Martha Faust said. About $85,000 of the commission went straight into materials and production, she said. The piece weighs more than a ton and required extra support to be built behind the wall. It's constructed from 14 shaped canvases, aluminum and six glass panels.

In December, the Indianapolis Museum of Art replaced Blackburn Architects PC as manager of the airport arts program. The airport signed a $100,000, one-year contract with the Indianapolis Museum of Art. That will come into play on the digital advertising. Airport officials said they are using the IMA to identify local and international artists to provide digital art content.

IMA spokeswoman Katie Zarich said IMA Art Services was hired to "review thoroughly the current arts program and to ensure the balance of commercial and public art spaces within the terminal and the airport’s gateway, among other responsibilities."

Faust, who was initially informed of the airport's decision by an adjunct curator from the IMA, bristled at the museum's role in replacing her husband's work with advertising.

"It just seems the arm of a museum shouldn't be getting this done," she said.