The architecture firm A2SO4 plans to spend about $1 million to renovate a long-vacant former Catholic church near the Lockerbie neighborhood as its new headquarters.

The stately brick and limestone building, at the southwest corner of College Avenue and North Street, has been vacant at least 25 years. It was built in 1879 and served as the home of the St. Joseph Parish until 1949, according to the parish website.

The interior is in surprisingly good condition, with the exception of some damage from water that seeped in from the spot where the old steeple stood, said A2SO4 President Sanford E. Garner, who bought the building in 2002 with a partner, Mark Maryonovsky, intending to convert it into condos. 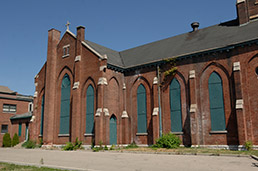 The church, which has been vacant for at least 25 years, will house 22 A2S04 employees after renovation.(IBJ Photo/ Perry Reichanadter)

The condos never materialized, and Garner put the former church under contract to another developer in 2006, but that deal also deal fell through.

Garner now plans to use the building as headquarters for A2SO4, the architecture and design firm he founded in 2001. He hopes to start the renovation work by September and finish it by year's end. The firm's 22 employees would relocate from offices at Union Station.

Garner is talking with the Indianapolis Historic Preservation Commission about the project, which shouldn't require extensive approvals since most of the work will be on the interior. New windows, gutters and downspouts, a new roof, and new ramps for handicap access will be added. And the exterior brick will be tuck pointed.

"I'm trying to keep as much of the interior as I possibly can, including eight old paintings on the ceilings and the walls," said Garner, 42. "It's a really neat space."

A2SO4 is the city's 10th-largest architectural firm, with $3.8 million in 2010 billings, according to an IBJ list published last month. The firm specializes in educational and commercial users, historic preservation and urban design.

Several real estate deals are in the works or have recently closed in the area surrounding the church.

A buyer is preparing to close on a three-story brick building behind the church that once was known as St. Joseph's Hall and housed the church's school. The would-be buyer, a partnership affiliated with local attorney Michele Jackson, also plans to acquire a small cottage and a vacant lot to the west.

And The Whitsett Group is working on a $27 million plan to build 190 apartments and more than 44,000 square feet of retail and office space on a parcel northwest of College Avenue and Michigan Street.

Whitsett also owns the 707 East North apartment building, which sits directly across the street from the former church.