The Indianapolis Indians, the city’s minor-league baseball team, keeps racking up big numbers in spite of the country’s economic malaise.

The Indians have posted year-over-year attendance increases in four of the last five seasons. 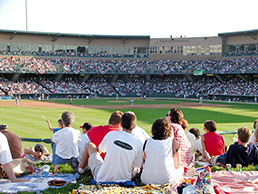 The Tribe was aided by a mid- to late-season attendance rush. Over a 28-game stretch from June 3 to Aug. 6, the Indians averaged more than 10,000 fans per game.

The season total represents the Indians’ third-best attendance since 2001. Early in the season, the Indians welcomed the 9-millionth fan to come through the turnstiles at Victory Field since the ballpark opened July 11, 1996.

Team officials credited good weather and the creativity of the team’s marketing staff in coming up with myriad game-day promotions for the attendance increase this season.