Five years ago, Mark Lindenlaub never would have imagined that his not-for-profit affordable housing development group would be $200,000 in debt and fighting to keep its rental homes out of tax foreclosure.

Nor would Lindenlaub have thought in 2006, when he applied for property-tax exemption on his Columbus-based group’s administrative building and 35 rental units, that it would be denied. Especially since his group, Housing Partnerships Inc., had received exemptions twice in prior years.

Now, Lindenlaub is preparing to fight Bartholomew County officials’ decision, which was upheld by the state’s tax review board, in Indiana Tax Court. A hearing on his case is scheduled for Nov. 15. 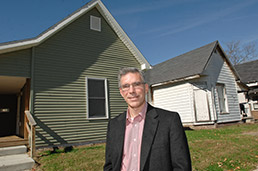 Mark Lindenlaub’s affordable-housing group has fallen into debt and been barred from bidding on tax-foreclosed properties since its exemption was denied in 2006. (IBJ Photo/ Perry Reichanadter)

Its outcome could have major implications in the growing debate over not-for-profit tax exemptions in Indiana.

Legal experts say a ruling against Housing Partnerships would have a particularly significant impact on the state’s 45 other community development corporations, which, like Lindenlaub’s, provide affordable housing to low-income residents.

But some not-for-profit advocates also are concerned that it could put other charitable groups—from United Ways to community centers—at greater risk of having exemptions denied. That’s because the exemption denial involves not just Housing Partnerships’ rental properties, but also its administrative building.

Unlike some states, Indiana leaves it up to local Property Tax Assessment boards of appeals, with the guidance of county assessors, to decide whether groups that apply for exemptions receive them. Groups with not-for-profit status don’t automatically get exemptions; they must prove they are meeting certain criteria, such as alleviating a government burden, to qualify.

Not-for-profit advocates say state guidelines on which groups should get exemptions leave room for interpretation, which leads to inconsistency in how the law is applied.

In the last few years, about 30 not-for-profits have been denied property-tax exemptions, according to a member survey by the Indiana Association of United Ways. Some of those groups were able to get exemptions reinstated by working with their county assessors, but others have had to pay legal fees to fight the decisions.

In addition, about 60 Indiana Association for Community Economic Development members, which include both for-profit and not-for-profit developers and other human services organizations, reported concerns about not receiving exemptions and other issues, such as payments in lieu of taxes.

Those groups attribute the disagreements to assessors’ applying the same law differently—and to property-tax caps that have put additional pressure on local governments to come up with cash.

“We have sensed this ideological shift that really challenges what’s the role of government,” said Lucinda Nord, vice president of public policy for the Indiana Association of United Ways. “And we know a lot of the things, including property-tax exemption, that we believe are fundamental to the charitable sector have come under question.”

Nord and others will be pushing in the lead-up to January’s legislative session for changes that would create more uniformity in how the property-tax-exemption law is applied. That could include clarification on how the application process is administered, or possibly changes in state law.

Meanwhile, they will be watching closely as the tax court mulls Lindenlaub’s case, which could create precedent for other affordable housing groups around the state.

Indiana law says land used by a group or individual for “charitable purposes” should be exempt from property taxes. According to case law, a charitable use includes providing “relief of human want” and alleviating a government burden.

Having federal not-for-profit status—or being an affordable housing developer—does not in itself qualify an entity to receive a property tax exemption. But Housing Partnerships Inc., which is a 501(c)(3) not-for-profit, contends that by the statutory and case law definitions, it should qualify.

The group builds and rehabilitates homes, primarily in economically distressed areas of Columbus, and sells or rents them to low- to moderate-income clients at subsidized rates.

The group, which also provides credit counseling and home-buyer education, gets about half its money from government sources and the rest from private grants, foundations and the Federal Home Loan Bank of Indianapolis.

Reagan also said the group didn’t prove its services relieve a government burden. She said, based on the group’s testimony, Housing Partnerships refers people to other social service agencies and failed to demonstrate its rents were below market. The group also receives government grants, she said, and houses tenants who receive federal housing subsidies.

Sandy Bickel, the attorney representing Housing Partnerships, wrote in her brief that the board ignored evidence that the group provides below-market rents and affordable housing to people earning below 60 percent of area median income.

She contends that the state is misinterpreting case law to mean that any group receiving government funds is ineligible for property-tax exemption. And she points out that Housing Partnerships’ work helps address neighborhood blight by renovating dilapidated houses.

If the tax court sides with the state, Bickel said, it would establish precedent for denying exemptions for groups such as Housing Partnerships.

“If Housing Partnerships loses this case, then every community development corporation in Marion County—and all the affordable housing agencies across the state—would be at risk of losing their tax-exempt status also,” Bickel said.

The impact for Lindenlaub also would be severe.

Already, he has had to recover the 35 rental properties denied exemptions that fell into tax sale twice, dealing a public-relations blow to his group. Housing Partnerships has borrowed about $200,000 to cover legal fees and unbudgeted property taxes for the 35 properties plus another 61 rentals later denied exemptions. And he’s had to scrap plans to hire additional staff members to bulk up financial counseling services for low-income residents.

The end of his group’s tax exemptions could be its death knell, Lindenlaub said.

“We’d have to do some hard thinking and scrambling to decide whether we could even maintain our program,” he said.

“I just don’t know it would be economically viable, and I would have a big concern about affordable housing all across the state that’s been developed under the same conditions.”

For advocates such as Nord, Lindenlaub’s case provides evidence that the state needs to adopt reforms to improve the exemption process.

Her group is not pushing for more not-for-profits to receive exemptions, but wants greater clarity about applying the law.

That could come through legislators’ cleaning up technical contradictions in the law, or the department of Local Government Finance developing guidance documents to accompany exemption forms and providing training and technical assistance.

But some say addressing the problem could require more significant changes.

Rep. Milo Smith, R-Columbus, last session introduced a bill that would grant property-tax exemptions to all groups that have 501(c)(3) status.

He said that would create a more straightforward way of determining who receives exemptions—and reduce the subjectivity of the process. He intends to introduce a similar bill this session.

“It makes sense to have a set of guidelines for who gets the exemption and who doesn’t,” Smith said. “It ought to be consistent and uniform and equal.”

But Smith’s bill could again receive pushback from advocates for units of government, whose already-strained budgets would take an additional hit if more parcels were exempt.

“I understand why he wants to protect nonprofits, but he’s not looking at how services are being provided in an era of property tax caps and declining income taxes,” said Matt Greller, executive director for the Indiana Association of Cities and Towns. “To go after yet another tax base within a city is shortsighted at a time when we’re already low on resources.”

Other states have tried to create more uniformity by handling exemptions at the state level. In Illinois, for example, counties submit documentation about exemptions, but the state Department of Revenue ultimately approves or denies them.

Illinois also has grappled with defining more specifically in statute which groups qualify for exemption, but the statewide approval provides some confidence that decisions are not based on counties’ needs for local revenue.

“One of the reasons the state is the decision-maker in this is, we don’t have any financial benefit either way,” said Susan Hofer of the Illinois Department of Revenue.

“We look at this from the point of view of what is the law, what are the criteria tested by courts, and does this transaction meet those guidelines?”•