When Bart Shroyer joined Defender Direct Inc. in January 2007, it was already a $50 million company, but you would never have guessed it by looking at its accounting system. 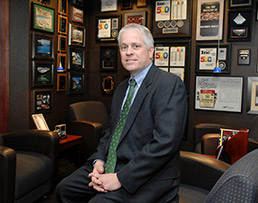 “We were QuickBooks’ biggest customer,” said Dave Lindsey, founder of Defender Direct, which sells and installs home-security and satellite systems. The company’s accounting department had not kept pace with the company’s explosive growth, Shroyer said, noting that the company was three months behind in posting its cash receipts.

Shroyer’s first move as CFO was to convert a conference room into a financial triage unit. He hired a dozen temporary workers who toiled in the conference room, strung with cords and wires, bringing Defender Direct’s books up to date.

Next, he moved the company to a higher-powered accounting system, established best practices and hired a controller.

Nearly five years later, Defender Direct has $325 million in revenue and 1,200 employees in 140 offices across the country.

“This growth can be attributed in large part to the financial leadership that Shroyer has brought to the company,” wrote Marcia Barnes, president, who nominated him for CFO of the Year.

One of his most valuable contributions was a financial scorecard, she said. It provides a weekly or even daily snapshot of how well the company is reaching key performance indicators for each of its lines of business.

Shroyer believes that by focusing on “the power of data,” Defender Direct will reach its goal of being a $1 billion company by 2017.

Defender Direct avoids the friction between finance and marketing that plagues many companies, Shroyer said. In fact, Defender Direct’s marketing budget is unlimited, as long as efforts get measurable results.

“If they have programs that work, I make sure they get funded,” he said.

Shroyer said that when the recession first hit, company officials joked that “we just chose not to participate.” While the financial crisis paralyzed many companies, Defender Direct viewed it as an opportunity to reinvest in itself, which Shroyer said is the key to growth.

“A lot of finance people want to cut expenses, but you can’t save your way to prosperity,” he said. “You have to look for opportunities to grow. That’s not always evident to a CFO.”

Prior to joining Defender Direct, Shroyer had spent more than 10 years in various financial roles at First Indiana Bank and spent time as a senior financial analyst for California-based Intel.

Shroyer also prioritizes staff development. He mentors several staff members every year through the company’s Leaders in Training program. And he formed Defender Direct’s Giving Council, a group of employees from various departments who meet monthly to guide the company’s philanthropy and community service. He also spearheaded a program that gives all employees two days off a year to serve the charity of their choice.•