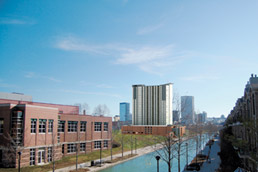 A proposed 26-story tower targeted toward student housing along the Central Canal would be the city’s ninth-tallest structure. (Rendering Courtesy Investment Property Advisors)

An Indiana developer wants to build a 26-story apartment tower designed for college students on one of the last available parcels along downtown’s Central Canal.

The $83 million proposal from Valparaiso-based Investment Property Advisors calls for 616 bedrooms in 485 apartment units, atop a six-level parking garage with 5,600 square feet of canal-level commercial space.

The apartments would be fully furnished—including TVs, beds, couches and desks—and would rent for $700 to $1,100 per bedroom, depending on the number of bedrooms in each unit. The rent would cover cable, Internet and all utilities.

The project would be built on two adjoining parcels along Ninth Street between Senate Avenue and the canal: a 1.2-acre property that includes the offices and warehouse of B.B. Kirkbride Bible Co. and a 0.26-acre canal-front sliver of land the city in August agreed to sell to the developer. Kirkbride is set to leave its property.

The apartment tower as proposed would become the city’s ninth-tallest building, placing it just after the new JW Marriott, which has 34 stories, and the City-County Building, which has 28 stories.

Investment Property Advisors put the Kirkbride property under contract and won city approval to rezone the site for multifamily development in 2010, but the final proposal requires another review because of its size and potential impact on the downtown landscape.

A public hearing scheduled for Dec. 29 likely will be delayed to give neighbors and neighboring property owners more time to study the proposal.

The project could encounter resistance in particular over its height and impact on traffic in the area. Among the likely remonstrators: Indiana University, which owns properties to the north and south and would like to expand its IU Health complex along the canal.

Privately held Investment Property Advisors has focused on mixed-use student housing projects since 2006, including developments adjacent to Valparaiso University and the University of Louisville. IUPUI is particularly promising since only about 4 percent of its students live on campus.

“There’s just a huge market for private developments for lease to students,” said Chase Sorrick, who owns the firm with partner Larry Gough. “We know the canal is a popular place to live, and it’s always desirable to live as close to campus as possible.”

It’s hard not to scoff at such a bold proposal at a time when financing is no sure thing, said George Tikijian of the local apartment brokerage Tikijian Associates.

But it might be doable if the developer can secure some form of tax abatement and manage to keep construction costs low.

“I guess if you’re going to build a high-rise, that may be the only place in the state where you can justify it,” Tikijian said. “It would be cool to see it built.”

Record-high downtown apartment occupancy rates near 96 percent won’t hurt. Neither will a strong demand for housing near the IUPUI campus; a recent study estimated the campus could support more than 5,000 additional beds.

Tikijian said he heard a recent investment deal involving the Cosmopolitan on the Canal valued the building at about $200,000 per unit, about $50,000 more than the cost to build each apartment. Rents at the Cosmo average $1,350 per unit. 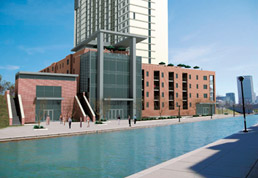 The proposed development would add public access to the Central Canal at Ninth Street, along with two small retail spaces for restaurants or shops along the canal. (Rendering Courtesy Investment Property Advisors)

The asking rents at the proposed tower, which would have one-, two-, three- and four-bedroom units, suggest the economics could work.

The developer expects to use a mix of private equity and bank loans to finance the project, perhaps in conjunction with bonds backed by a tax-increment-finance district covering the area.

Sorrick hopes to break ground by September 2012, which would allow the first residents to move in by summer of 2014.

The project also must survive a public hearing and city design review based on its location within the urban core.

State Rep. Mary Ann Sullivan, who lives along the canal in the Watermark community, likes what she sees so far. She was among a handful of neighbors the developers briefed on the project as they filed plans with the city.

“Density is a plus, and we’ve been happy with having more grad and young students after the Cosmopolitan opened,” said Sullivan, whose husband, Brian, is a principal in Shiel Sexton. “It’s good to have people around you when you live in the city. Hopefully, it can drive some more retail along the canal.”

Sullivan, though, is a bit concerned about the building’s height, and whether it will look appropriate along the canal. She’d like to see better materials than the bland stucco material on the Canal Square apartments. And she wonders whether one entrance, on Senate, is enough.

“I want to make sure we’re picky about the projects we do put in there now that we’re filling the spaces that are left,” she said.

Fellow Watermark resident Alise Voigt, director of guidance at Pike High School, is most worried about the building’s height.

“I don’t like the idea of 26 stories there,” she said. “I think aesthetically to have 26 stories on the canal will be out of place.”

The most formidable challenge to the project could be Indiana University. The school owns several properties along the canal, where it has built a handful of classroom and research buildings.

The university tried to acquire the property before Investment Property Advisors put it under contract.

“It’s no secret that would have been a good fit for the university, especially from a research perspective,” said IU spokesman Mark Land. “Bottom line, it’s not our property. We’re OK with letting the process play out.”

It’s too early to tell whether IU will offer any objection during that process, Land said.

“The proposal isn’t what we would use it for if we owned it, but we don’t,” he said. “We don’t really know much about what it’s going to look like; we’ve only seen some early drawings.”

Plans call for the tower to sit back from the canal and Ninth Street, while a larger, four-story base structure would extend to the property lines. The developers would build a public access point to the canal, including an elevator and rest rooms, where Ninth Street dead-ends at the Canal Walk.

One of the most important assignments for Ratio Architects, which is designing the building, is to make sure the tower’s presence doesn’t overwhelm the canal, said Bill Browne, a principal in the Indianapolis firm.

“We’re trying to find a building that settles into the canal context in a way that’s appropriate in a pedestrian scale at the canal level and on Ninth Street,” he said.

The plans call for canal-front retail space in the low-rise portion, which would be topped with a green roof. The taller structure would stretch toward Senate. Views from the units in the building primarily would be to the north and south.

Parking would be integrated into the structure, with 434 spaces spread over six levels. The planned number of spaces exceeds code requirements by 70 percent.

The base building would be clad in brick, while the tower would be covered by a “panelized stucco system with metal panels and expressions of the concrete structural frame,” Browne said. “It’s going to have lot of undulation and texture to it.”•