Nearly four years ago, Eli Lilly and Co. asked Buckingham Cos. to look at 14 acres of parking lots it owned downtown and figure out what a mixed-use development there connecting downtown and the Lilly campus might look like. 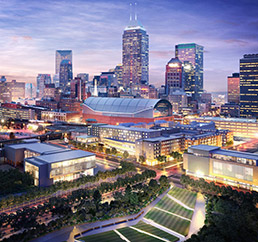 Buckingham tested the market and came up with a self-contained neighborhood designed to look contemporary but feel like part of the city.

“This will help Lilly attract and retain talent,” Travis said. “That was the litmus test: to make viable use of the land.”

Similar developments have sprung up in Houston (City Centre) and the entertainment-dominated L.A. Live in Los Angeles.

In designing the Indianapolis site, Travis said, the architects were told to push the envelope and integrate. Be mindful of where you are in the city and integrate well.

The material palette, too, was chosen to match the neighboring areas. The residential buildings will be brick.

“If you look at the context to the east of us, we have a city block of masonry buildings that have been there for a hundred-plus years,” Travis said. “So there’s a nod back to the historical scale and material palette of those buildings.”

The use of exposed steel in its raw form for balconies and canopies is reminiscent of the warehouse architecture historically near the site. But it’s being used in a contemporary way.

The area was designed with several public spaces, areas to walk around in and hold public events. Buildings facing outward are designed to blend in. Those that are more internal to the site reflect the warehouse blocks and buildings in the center of the Lilly campus.

A gateway at Delaware and Louisiana streets will serve as the main entrance.

Travis said a lot of time was spent thinking about how one would walk through the site, so the design team paid attention to the pedestrian environment and circulation. The project allots public and event space, a park for dogs, a public plaza on South Street, and parks and open space set aside.

The plan also includes: Manhole covers specifically designed for the site. Brick pavers in the streets. Light fixtures selected for the project.

Sustainable features are to include rainwater collection, which will be used to irrigate the green spaces and for fountains, and 10 car-charging stations for public and private use.

“There’s a tremendous amount of excitement with the construction that’s taken place, as well as with the amount of construction and the speed of construction,” Lilly spokesman Ed Sagebiel said. “We’re seeing what a vibrant downtown we have with the Super Bowl. All of this creates an element that will be inviting for many of our employees to look at and potentially live there.”

The six-story Alexander hotel will feature retail outlets on the first floor, the lobby/check-in on the second floor. The corner of the hotel tower, outside the footprint of the tower, is pushed out to hold a restaurant.

On the second floor will be a 2,200-square-foot bar enclosed in glass on three sides with a balcony overlooking the city. The designers envision residents and visitors stopping in before and after work, games and concerts. 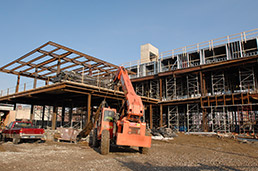 “We hope to capture scientists walking out of the labs at Lilly that want to talk about molecules over a beer,” said Buckingham’s Travis.

Nancy Nodler, a principal in the Houston office of San Francisco-based Gensler, the hotel architects, said the hotel was designed to look onto a landscaped courtyard that could be used for private parties, meetings and even tailgating.

The top floor will feature a private boardroom that also has a balcony space. Above that will be rooftop vegetation.

Among the notable design touches: Indiana limestone, and copper cladding on the roof and side of the lounge. The architects are also pursuing LEED silver certification.• 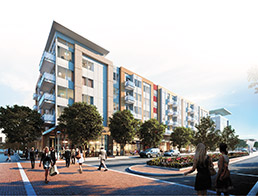 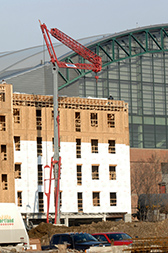 Six buildings on the site will house 250 apartment units ranging from one to three bedrooms. Two cast-in-place (rather than precast) parking garages will hold 750 cars.

“This is a collection of buildings that create a neighborhood that has its own character and identity and feel—and feels cohesive,” said Kelly Davis, managing principal of Boulder, Colo.-based Oz Architects, which oversaw the design of everything in CityWay but the hotel and the YMCA.

The buildings that face the most public street, Delaware, have a retail base on the lower floors and residential units on the upper floors—much like older buildings on the street and around Monument Circle. Notable design touches will include 12-foot-deep cantilever “flying canapés”—the roof plane is done in a way that it extends beyond the building edge.

“We’re trying to take best urban design aspects of cities and put them together in the way people live today,” Davis said.•