What’s concealed within the lower level of the IUPUI University Library building very well might be the best-kept secret on the downtown Indianapolis campus.

Only a select number of students are allowed to enter. The criteria: superior intelligence and lofty SAT scores.

It’s home to the upstart IUPUI Honors College, which has transformed the once-dingy basement into vibrant study and administrative space replete with bright colors and trendy furniture to complement the latest computer technology. 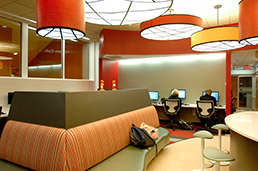 The study area is a highlight of the renovated space occupied by the Honors College in the lower level of the campus library. Five-hundred students are enrolled in the program. (IBJ Photo/ Perry Reichanadter)

The energetic atmosphere created by an ambitious redesign by Indianapolis-based Rowland Design Inc. is enough to make any competing administrator green with envy.

In fact, the space is quite green in an environmental sense. Several materials used in the construction were recycled and lighting is motion-activated, said Jane Luzar, dean of the IUPUI Honors College.

“This space makes a statement that IUPUI has stepped up to recognize how special these students are,” she said.

The result is in stark contrast to the dark and drab surroundings of white walls, soiled carpets and suspended ceilings that once contained little more than study tables, vending machines and a few microwaves.

It’s where students would congregate to grab a bite to eat while studying during the time food wasn’t allowed in the library. The rule had been rescinded before IUPUI began scouting locations for its Honors College, leaving the space virtually unused as storage. 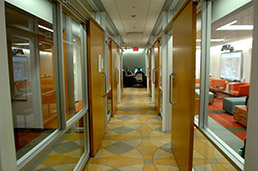 “The Honors College is the most important college on campus and it was in the least desirable space,” said Rowland Principal Bob Frist. “There was no real reason to be down here.”

Much of it takes on a horseshoe shape with two corridors—one flanked by administrative offices and the other by student pods—leading to the centerpiece student study area.

One of the most dazzling features of the design is the large window that replaced much of a cement wall, enabling students and visitors to look down into the study area as they descend the stairs from the building’s first floor.

The study area is equipped with wireless computer stations, a small kitchen and a fish aquarium that adds character to the stylish décor. Students with artistic talents plan to curate their own works in the area to provide further flare.

Administrative offices are easily visible through glass partitions meant to provide an openness to the space that lacks natural light.

The two halls leading to the study area are absent any sharp turns. Instead, curved entrances from both sides are more inviting, Frist said. 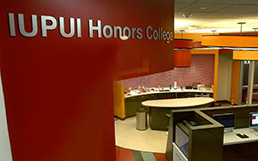 The other side—opposite the administrative offices and separated by the large staircase—is furnished with smaller study pods with high-tech, touch-screen smart boards and old-fashioned whiteboards taking the entire wall space.

It’s not uncommon for the whiteboards to be filled with lengthy math equations hashed out by the students, Luzar said.

Five-hundred of the 30,000 students on the campus are enrolled in the Honors College, with an ultimate goal of 800.

“We broke all the rules and did things along the way in a very sustainable way,” she said.

IUPUI lured Luzar, an Indiana native, away from the University of Florida, where she was associate dean of agriculture and life sciences, to become dean of its honors program.•