Indiana Landmarks is making another push to save an 1850 house on the city’s northwest side that is threatened by development.

The Cotton-Ropkey House, at 79th Street and Marsh Road just west of Interstate 465, sits on 95 acres that Kite Realty Group bought in 2004. Five years later, facing a tepid development climate, Kite agreed to let Landmarks search for a buyer. Kite would sell the house for $1 if the buyer would agree to move it to another site.

So far, Landmarks has come up empty in its search, but the preservation group has renewed the effort, publicizing the plight of the house in its recent newsletter. “The house enjoyed a brief reprieve when development plans for the property stalled,” the newsletter said. “But now the redevelopment of the site is gearing up and the Italianate-style house is in grave danger.” 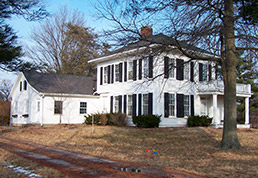 Chad Lethig, Indianapolis preservation coordinator for Indiana Landmarks, says the house, which is one of the oldest structures in Marion County, could be moved for about $35,000. The problem is there aren’t many places to move it.

To the east is I-465, which the house couldn’t cross, and within a mile of the site to the west and south there are topography issues that would make moving it all but impossible, Lethig said. He said the house could be moved north, over land, to 86th Street if the move happened when the ground is frozen—or very dry, as it is now.

The most likely site is a three-quarter-acre parcel facing 79th Street that is roughly 1,000 feet to the west in the Normandy Farms subdivision. Lethig said the land could be purchased for between $65,000 and $85,000.

Depending on the buyer’s plans, the house could be moved and restored for between $185,000 and $285,000, including the land, according to Indiana Landmarks estimates.

Although the house has been added to over the years, the original house—and the part Landmarks is most keen to save—is a 2,200-square-foot, two-story structure with Greek Revival and Italianate features, including six-over-six windows, walnut floors, crown moldings, and other original details.

Sandy Weddle, a broker for F.C. Tucker Co. who is familiar with the northwest side, said the house would list for at least $300,000 after a well-executed restoration.

Lethig believes time is running out. “Our fear is the [development] market is starting to turn around. [Kite is] starting to grow a little anxious about keeping it.”

Zeff Weiss, an attorney at Ice Miller who represents the owner, said the house is threatened by theft and vandalism. But he said development is not imminent and his client hasn’t given Landmarks a deadline.

Lethig said it isn’t out of the question that Landmarks would buy and move the house, but he said the preservation group’s real estate program is “cash poor at the moment.”

The pre-Civil War home was built by farmer John Cotton beginning in 1848 and stayed in the family until 1937, when the Ropkey family bought it. The Ropkeys sold the house in 2004.