Steinberg stands by his work.

The economics professor, who specializes in philanthropic studies, has seen his fundraising principles speared by a charity watchdog group and then by a cable news network.

At issue is his belief that charities are justified in spending heavily on fundraising, because doing so positions them for long-term success.

“The way that I teach this—mostly to students in the philanthropy programs and sometimes to public groups—is that this is easy. Everyone should do it,” he said.

Charity watchdogs call the approach unethical and assert that donors need to know most of their money goes toward the charities’ causes, not marketing campaigns or other overhead.

Chicago-based CharityWatch reviews not-for-profits’ finances and grades them on factors such as how much of their donations go toward their missions.

CNN reported in May that Washington, D.C.-based DVNF collected $56 million in donations since launching in 2007. But the agency spent $61 million from 2008 to 2010 on services from Brickmill Marketing Services, a New York City firm specializing in direct mail fundraising.

Almost no donations went to DVNF’s mission of aiding injured and sick veterans, according to CNN.

In June, the news network reported New York City-based SPCAI had received almost $14 million in 2010 and spent about $60,000 on cash grants to animal shelters. (Tax records IBJ reviewed show the group, which was founded in 2006, listed $5 million in “animal medical supplies” expenses that year and $9 million in “marketing and media” expenses.)

After the scrutiny over the groups began, they asked Steinberg to look at their finances and prepare an expert opinion as testimony.

The news reports also raised an array of other questions about the groups’ operations that were unrelated to fundraising costs. Steinberg was not hired to examine those issues.

“On fundraising, no one’s ever challenged the theoretical results,” Steinberg said of his philosophy. “There are people who doubt it, but no one has successfully found a flaw.”

Steinberg is a 57-year-old career academic who shifts seamlessly from jocularity to sincerity.

He matter-of-factly explained his theories—and the backlash they’ve received—as he sat in a fifth-floor lobby of IUPUI’s Cavanaugh Hall, which was his escape from an office cluttered with books and documents accumulated over his 20 years at the university.

His fundraising philosophies have changed little since he developed them during research for the doctoral thesis he finished in 1984 at the University of Pennsylvania.

One of the conclusions of his thesis was that donors, from a pragmatic standpoint, should not care how much of their money pays for fundraising.

The debate is whether they do care. 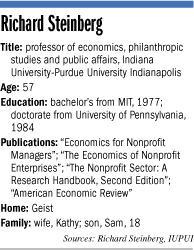 “I guess the correct answer is, some people care. Some people don’t. Some people say they care but don’t act that way,” Steinberg said. “But ‘should they care?’ has never been challenged.”

But donors contribute to not-for-profits with the understanding that the organization will put that money toward its cause, argued Daniel Borochoff, CharityWatch’s president and founder.

Ideally, groups want to bring in donors at low contribution levels and persuade them to keep giving larger amounts over time.

“But who in their right mind is going to give a huge contribution, unless they don’t understand what’s going on at these F-rated charities?” Borochoff asked.

He said such instances make donors more skeptical of all fundraising. And he questions whether Steinberg’s approach even works.

“Theoretically, it sounds attractive, and there may be some individual cases where the marketing investment leads to more dollars down the road,” Berger said. “Nine times out of 10, that doesn’t happen.”

He added: “It can cause sector-wide damage. The whole nonprofit sector is based upon public trust.”

The IRS sets policies for not-for-profits’ spending in areas such as employee compensation and political lobbying. Groups that violate the standards can lose their tax-exempt status.

An IRS spokesman answered questions about the agency’s tax-exempt policies by referring to an online handbook for governing not-for-profits.

Look at the books

Steinberg said that if charities are worried their high fundraising costs will rankle donors, they can present the figures in ways that are less likely to raise eyebrows.

One approach, he said, is through “joint cost allocation.” For example, if a charity sends out a brochure to increase awareness of its cause, it might solicit donations on the back of the pamphlet. Some groups will split the “joint costs” as “educational outreach” and “fundraising.”

So when donors see tax records or annual reports, more money is listed as a program expense and less is listed as fundraising.

“There’s enough flexibility in the accounting that you can change your cost ratio without feeling like you’re lying,” Steinberg said. “They don’t meet my definition of ethical boundaries, but there’s so much gray area that a person could easily do it without thinking they were being unethical.”

Berger said joint cost allocation is “based upon deceit of the public.”

“I don’t think there’s any hard and fast rules for this,” he added, “but common sense and judgment when you look at these particulars can help you when you make that determination” on whether the charity is ethically accounting for its expenses.

Steinberg bases all of his research conclusions on empirical data, versus more abstract field observations or anecdotal evidence.

Because of that, he doesn’t focus on the psychological or sociological factors that can change from group to group, such as how negative publicity can affect donations.

“Marketing, accounting and ethics are not my expertise,” he said.

Steinberg is self-deprecating about his age, his social skills and his acting chops in community theater productions. But he adamantly defends his professional work.

He returned CharityWatch’s criticism with equal fervor, saying the organization investigates groups based on preconceived notions and bias.

It’s not about what rival colleagues or the media say about his work, he said. Not-for-profits and policymakers are what matter to him. And he has never expected quick acceptance of his theories.

“Many nonprofits … are aware that the fundraising cost ratio is a bad way to assess nonprofits,” he said. “Some of them think it’s a bad way, but with a little fixing up it’s OK, which is not my position.

“Others think it’s a bad test and it can’t be repaired, which is my position. And some people say it doesn’t matter what we think. ‘If our donors are going to push at us, we better make it look good.’”

Association of Fundraising Professionals spokesman Michael Nilson said donors should decide for themselves whether organizations are spending their money effectively.

The Better Business Bureau says charities should spend no more than 35 percent of their donations on fundraising costs. But there is no “magic bullet” figure that establishes a clear ethical line, Nilson said.

“Fundraising costs just can’t be the end-all-be-all,” he said. “If your overall costs are 70s, 80s, 90s [percentages], then I think it’s time for donors to ask some serious questions.

“If you have an issue with that, obviously it’s voluntary. So go look into another organization if you’re not comfortable with the fundraising costs.”•