Indiana’s major-party candidates for governor can’t bestow a job upon every unemployed Hoosier, but each has offered what he considers the next-best thing: at least $500 million in tax cuts.

Republican Mike Pence wants to reduce the state income tax 10 percent. He says that would save a family of four $228 a year and prompt small-business owners, most of whom pay their taxes as personal income, to start hiring. 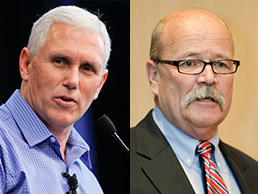 Democrat John Gregg would erase the state sales tax on gasoline, which he says would save households $261 to $522 a year and especially benefit lower-income Hoosiers. Not to be outdone by the Republican on business incentives, Gregg also has proposed credits that would essentially wipe out corporate income taxes for Indiana-based companies, plus a laundry list of job-creation tax credits aimed at exporters, manufacturers and small business.

“Tax policy matters some, but it doesn’t matter a lot, at least according to the research I’ve done,” said James Alm, professor of economics at Tulane University in New Orleans. “What seems more relevant for state economic growth are things like what the government is using the money for.”

The candidates also tie their proposals on education and infrastructure to economic growth, and the reason is obvious. Indiana’s unemployment rate has been at or above 8 percent in all but two months since December 2008. In August, it climbed above the national average, to 8.3 percent.

But the candidates aren’t explicit about their goals.

Pence told IBJ his goal is to “have more Hoosiers employed than at any time in our state’s history,” reiterating his pronouncement at the state GOP convention in June.

Indiana hit its peak in 2000, with more than 3 million workers on employer payrolls. That figure bottomed out at 2.79 million in 2009 and was 2.89 million in August.

Pence spokeswoman Christy Denault noted that the candidate’s official goal is to increase private-sector employment, which had a recent peak of 2.6 million jobs.

Gregg hasn’t stated a specific goal, but he told IBJ, “Every one of our policies is geared for jobs.”

Libertarian gubernatorial candidate Rupert Boneham dismisses the notion that government can create jobs, saying the focus should be on encouraging entrepreneurship and business growth. He also wants to restructure Indiana’s tax system to eliminate “political favoritism or cronyism.”

The candidates sound vague next to Gov. Mitch Daniels, who hammered on specific economic statistics like per-capita income during his 2004 campaign against then-Gov. Joe Kernan.

Indiana’s per-capita income, adjusted for inflation, declined from $35,345 in 2004 to $34,042 in 2010, the latest year data is available. But Daniels had the right approach, said Michael Mazerov, senior fellow at the Center on Budget and Policy Priorities in Washington, D.C.

“Too often, it does get defined by only creating jobs,” he said. “You can create lots of poverty-level-wage jobs, but you would hope that isn’t what the state is going to spend its limited resources on.” 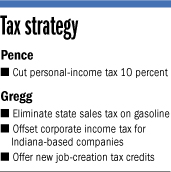 Both candidates would give up significant revenue to deliver their tax cuts.

Pence, a U.S. House member since 2001, made his name by touting conservative social causes, such as yanking all federal funding from Planned Parenthood because it performs abortions. Running for governor, however, the 53-year-old from Columbus has talked mostly about building upon Daniels’ legacy of fiscal responsibility.

Lowering the state’s flat personal-income tax rate from 3.40 percent to 3.06 percent over two years would cost $261 million in the fiscal year ending June 30, 2014, and $534 million the following year, according to Pence’s projections.

So Pence would give up about 3.7 percent of the state’s $14.5 billion in general revenue. He thinks Indiana can afford the tax cut because of the budget surplus Daniels created.

Pence would direct the rest of the budget surplus into reserves, which he would maintain at 12.5 percent of revenue.

Indiana would have the lowest tax burden in the Midwest, according to the conservative Tax Foundation in Washington, D.C., and Pence thinks that would create an even bigger competitive advantage over high-tax Illinois in attracting new firms.

Plus, cutting taxes is the classically conservative thing to do.

“I’d like to grow the economy, not grow the government,” Pence said.

Gregg, 58, shares much of Pence’s conservatism, but he’s skeptical of Daniels’ budget forecasts.

“I don’t even know how much is really in that surplus,” he said.

Gregg said that’s why he’s found other ways to cover the loss of a gas sales tax, which he estimates would cost $540 million a year. He said Indiana could recover that money through annual efficiency audits, which in other states have produced savings of 5 percent. Applied to Indiana’s general-fund revenue, that would mean $700 million a year, he said.

More income-tax credits for businesses would cost $350 million, which Gregg said can be covered by collecting sales tax from online retailers. Amazon.com signed an agreement with the state earlier this year to start collecting Indiana’s 7-percent sales tax in 2014, and Daniels said he would ask Congress to require all online retailers to collect the tax.

A former Indiana House speaker who practices law from his tiny hometown of Sandborn in southwestern Indiana, Gregg has spent considerable campaign energy reminding voters of Pence’s record in Washington, D.C., and contrasting that with his resume as a businessman and bipartisan leader.

Elected speaker in 1996, Gregg oversaw a House that was evenly divided between Republicans and Democrats. He also points out that he bought a soda shop at the age of 15, participated in the family business, and worked as a land agent for Peabody Energy.

“I’ve created a pro-business environment in a bipartisan fashion,” he said. “I’m the only one that’s delivered on those jobs results, going back to [age] 15.”

Indiana’s balance sheet is in enviable shape, but there’s a lot of pent-up demand for building and infrastructure maintenance and education spending, said John Ketzenberger, president of the Indiana Fiscal Policy Institute.

Universities, K-12 educators, school-voucher advocates and the transportation lobby all want more money out of future budgets, he said.

The candidates haven’t ignored those needs.

Pence wants to close the so-called “skills gap” that causes some jobs to go unfilled even amid high unemployment.

“If we lean into this work-force issue, I honestly believe the state’s on the verge of an era of growth like no other time in our lifetime,” he said.

“If you’d rather go to work than go to school, we want the high school to work for you,” he said.

Gregg rolled out a multi-faceted infrastructure plan, which he says would free up $3.5 billion for roads, bridges and other transportation modes, and create 97,300 jobs.

Gregg’s plan aims at the fact that the state is spending the last dollars available from Daniels’ Major Moves program, which was funded by a 75-year lease of the Indiana Toll Road. 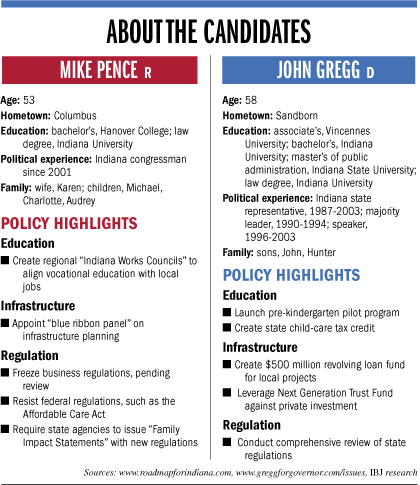 Gregg wants to shift some money out of the Next Generation Trust Fund, also funded by the toll-road lease, and use it to create a $500 million revolving-loan fund, which could be tapped by local governments to improve public transit, ports and airports, along with roads and bridges.

He projects that another $3 billion would come from leveraging the remainder of the trust fund in public-private partnerships.

Gregg said his infrastructure plan will help tie together the four corners of the state and grow key industries—manufacturing, agriculture and life sciences. Meeting at the downtown offices of Bingham Greenebaum Doll LLP, where he’s a partner, Gregg slapped a conference room table as he exclaimed, “We don’t even have a rail policy. Come on.”

Yet neither candidate has proposed a straightforward way to boost basic road-maintenance revenue or to restore the $300 million that was shaved off primary and secondary education to help create today’s budget surplus, Ketzenberger said.

“I think that shows the priorities of the campaigns, and it shows the challenge for those who would like to see additional spending on things they deem important,” he said.

Given Indiana’s balance sheet, tax policy expert Kim Rueben said she can see why the next governor would want to give something back to the taxpayers, but she thinks both candidates’ plans are a little hasty.

Rueben, senior fellow at the Urban Institute’s Tax Policy Center in Washington, D.C., said she would be more comfortable with Pence’s income-tax cut if it were temporary, so Indiana wouldn’t be stuck if the surpluses disappeared.

Gregg’s gasoline-sales-tax cut would be more progressive, Rueben said, “But why not just halve it? I understand the sentiment. I don’t necessarily think it’s prudent.”

With an aging population, Indiana’s health care and public pension costs are sure to rise, and another recession could wipe out even the healthiest reserve fund, Rueben said.

“Keeping an eye on longer-term costs and the fact that spending might have to go up is an important thing to do because it’s much harder to raise taxes than lower them,” she said.

Economists and policy experts were skeptical that either candidate’s tax cuts would stimulate much growth.

Pence wins points with economists for proposing a broad-based cut that wouldn’t favor one industry over another. But Indiana’s personal-income tax is already very low, 32nd out of 41 states that have the tax, said David Sjoquist, economics professor at Georgia State University.

“It would probably have some effect, but it’s hard to say how much,” Sjoquist said.

Corporate income tax structures seem to have more impact on business decisions than personal-income tax, Alm said. Offsetting corporate income tax for Indiana-based businesses, as Gregg has proposed, would make the state more attractive than its neighbors, he said.

Gregg’s plan relies on creating a new “headquarters” tax credit, based on the number of Indiana employees.

“Your better policy, if you’re really wanting to use taxes to attract business, is cut taxes across the board,” Alm said.

As for Gregg’s various credits for job creation, Rueben said, “There’s a part of me that kind of hates those things, in that you’re setting yourself up to be gamed by business.”

Unlike the federal government, states are forced to balance their budgets, which nullifies any economic boost they would get from tax cuts, said Mazerov at the Center on Budget and Policy Priorities.

“There’s a focus on tinkering with the tax system as the be-all and end-all of economic development,” he said. “It sounds good. … It just doesn’t work very well.”•