The most striking feature of a proposed $43-million development along Mass Ave is a Times Square-style electronic screen that would wrap around the building's corner and rise more than three stories. 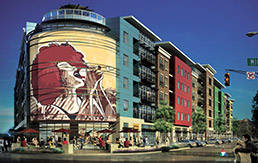 A giant electronic screen is planned as part of the $43M Mass Ave project. (Rendering courtesy of Schmidt Associates)

"We think it'll be a focal point of the city," he said Thursday, shortly after Indianapolis Mayor Greg Ballard led an unveiling of the five-story project on 1.45 acres bordered by Massachusetts Avenue, North New Jersey Street and East North Street.

The brightly colored building will contain a mix of brick, stone and metal paneling along its Mass Ave frontage, with the electronic screen wrapping 180 degrees and facing the skyline from the corner of Michigan and New Jersey streets and Massachusetts Avenue.

The screen, which will cost about $250,000, will look like a large computer monitor, said Sarah Hempstead, a Schmidt principal.

The "media mesh" material will be made of stainless steel fabric woven with thousands of LED lights, which direct the light outward and away from the residents whose units are behind the screen, she said. The material also won't block residents' view of the skyline from their apartments.

The idea is to display a "rotating art gallery" and perhaps a daily display of arts activities and events, Hempstead said. It would not display advertisements.

The screen will require zoning approval as part of the project's overall review by the city's planning department.

It was no surprise that the anchor for the project will be upscale apartments, as both rent and occupancy rates have risen to record highs in the downtown area, and units at the still-to-open CityWay on the southern edge of downtown have leased up quickly.

For the retail portion, the developers hope to land a specialty grocery store and a couple of restaurants with outdoor seating, Paul Kite said.

"I'd love to see some national tenants help solidify the local tenants and help expand the trade area," he said.

The city plans to contribute $3 million from a downtown tax-increment-financing district and the prime real estate—currently occupied by the Indianapolis Fire Department—as a subsidy for the project.

The development team is required to put $5.4 million into an escrow account it may draw on to fund construction. If the project stalls, the city would keep the land and cash.

Construction is expected to begin in 2014. The city must first relocate the Indianapolis Fire Department headquarters, Fire Station No. 7 and the Firefighters Credit Union.

Once the site is clear, city officials and the developers will finalize the details of a project agreement before closing on the deal.