Who’d have thought the Central Canal and the Artsgarden were such tourism attractions for people outside of Indiana?

Visit Indy learned that surprise and more in its first focus group research on out-of-staters—specifically people in Chicago, Louisville and St. Louis.

IBJ.COM EXTRA
For a look at the focus group results, click here.

The sessions, conducted this spring by Carmel-based Strategic Marketing & Research Inc., were intended to guide the former Indianapolis Convention & Visitors Association in a rebranding effort. The promotion organization proceeded to redub itself the edgier Visit Indy.

But the organization also discovered that photos of the canal and Artsgarden played particularly well with the 120 Midwestern consumers and 33 convention planners scattered across the nation, Visit Indy Vice President Chris Gahl said.

Of the 60 photos and a sampling of potential television, radio and print ads promoting Indianapolis’ tourism offerings shown the groups, the participants enthusiastically fingered a canal photo with downtown in the background and an aerial photo of the glass-and-steel Artsgarden.

Not all the response was positive—far from it. The focus groups said Indianapolis’ skyline were boring, and exterior shots of the city’s sports palaces elicited little excitement.

Yet, Visit Indy has learned enough to redirect promotion campaigns launched this fall and geared to run through spring. The lesson: Capitalize on the good revelations and downplay the unappealing. 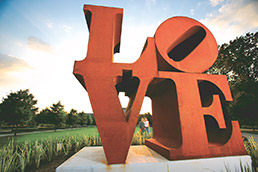 The LOVE sculpture at the Indianapolis Museum of Art elicited positive reaction from the focus groups. (Photo courtesy Visit Indy)

“People were surprised by our arts and culture, our architecture and our entertainment options. We need to do a better job of marketing the surprise elements of our city. That’s where there’s room to grow,” Gahl said.

A local art landmark that isn’t necessarily considered a major tourist attraction made quite an impression on out-of-towners.

The LOVE sculpture outside the Indianapolis Museum of Art “put Indianapolis forward as an arts and cultural hub,” he said. The sculpture—which has been at the IMA since 1975—is displayed prominently on the cover of the Visit Indy Visitors Guide as well as in direct mail pieces, brochures and print ads aimed at leisure travelers and convention organizers.

The photo of the LOVE sculpture rated right alongside those of the canal, Artsgarden and Circle as one of the four most appealing images of the city.

While photos that demonstrated large crowds and the pageantry of the Indianapolis 500 tested well with the focus group, some close-ups of the racing did not, especially one of the start of the 500-mile race that showed a lot of grit kicked up in the air.

Exterior photos of downtown sports complexes were not compelling, but shots on the inside showing the action did better. One photo of Lucas Oil Stadium with the roof open during an Indianapolis Colts game was especially appealing to focus group members. 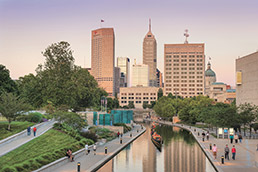 One of the best-received photos was of the central canal. (Photo courtesy Visit Indy)

Something about the Central Canal resonated strongly with the focus group participants. Not even the Artsgarden was received as enthusiastically.

Gahl thinks he knows why: water. Hardly anyone—even people who have been to Indianapolis—know the city has water, let alone a downtown canal.

“They found it very appealing that we not only have water in our downtown, but that it’s a walkable distance to hotels, businesses, museums and other attractions,” Gahl said.

Known within Visit Indy as the “iconic skyline shot” or the “canal money shot,” the photo shows a gondola floating down the center of the canal and pedestrians meandering past the Medal of Honor Memorial with the OneAmerica tower, Statehouse and other skyscrapers in the background.

The shot portrays Indianapolis as a hub of government and commerce as well as a place to relax and play, Gahl said.

Jay Gladden, dean and professor at the School of Physical Education and Tourism Management at IUPUI, said, “The canal is a tremendous asset and there’s an opportunity to make it even more attractive.”

Visit Indy CEO Leonard Hoops, who came to the organization from San Francisco in 2011, has promised to more heavily use the canal to attract visitors through promotions and marketing. 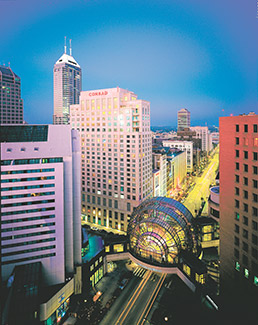 The Artsgarden was one of the top attractions to the focus groups. (Photo courtesy Visit Indy)

The focus groups viewed the Artsgarden, the glass-and-steel structure suspended over the intersection of Illinois and Washington streets, with a great deal of curiosity.

“People wanted to know, ‘What purpose does that structure serve? What’s inside? What can you do there?’” Gahl said.

Even though the Artsgarden hosts about 350 events annually, the structure often takes visitors and outsiders by surprise, said Dave Lawrence, CEO of the Arts Council of Indianapolis, which owns and operates the Artsgarden.

“The fact that that it hovers over a busy intersection, its arch shape, the all-glass structure and dramatic lighting make it a very compelling image, one of the icons of the city,” Lawrence said. “It’s one of those spaces that people say, ‘Wow, I didn’t know Indianapolis had a facility like that.’” 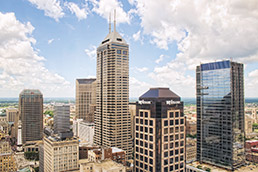 This photo and others of the skyline was considered boring. (Photo courtesy Visit Indy)

Not only were some shots of the Indianapolis skyline deemed boring, but they were considered particularly unappealing during the day.

“When people think of skylines, they think of cities like Chicago, New York and Hong Kong, not Indianapolis,” said Jay Gladden, dean and professor at the School of Physical Education and Tourism Management at IUPUI.•

The focus group feedback has city officials wondering if the canal and Artsgarden are being promoted enough to visitors and potential visitors, and what can be done short term and long term to maximize visitor spending here.

In the short term, the canal photo is being used in print and television ads in regional markets this fall as well as on the cover of Visit Indy’s primary print marketing pieces aimed at leisure travelers and convention planners.

The Artsgarden photo will be used in a TV ad campaign this winter and spring. It is also being used in print promotional materials.

Long term, Visit Indy is working with the Mayor’s Office, Indianapolis Downtown Inc., the Indianapolis Chamber of Commerce and other local organizations such as the Arts Council to better market those visitor attractions.

The key, Gahl said, is to make the city’s hidden gems less hidden.

The canal, unlike the Artsgarden, which towers above a major intersection, is below street level and less visible to passersby, said Julia Watson, Indianapolis Downtown Inc. vice president of marketing.

Many visitors may never know they can walk, jog or ride a bike along the canal, much less float down it on a paddle boat or have a reception, awards banquet or other event along its banks.

IDI has been working with downtown hotels to get them to direct people to the canal and is working with the Mayor’s Office and Visit Indy to improve programming and to build a diversified tenant mix “that will maximize the area’s potential,” Watson said.

The canal needs a better mix of attractions including “restaurants, retail, arts and culture, and attractions for kids,” said IUPUI’s Gladden.

While Visit Indy’s Gahl thinks the south end of the canal has strong attractions, he said the stretch north of New York Street “needs improvement.”

“Once we let people know about this attraction, we have to have things to keep them there and to keep them coming back,” Gahl said. “Right now, there’s a lot of brainstorming about how to improve activation there.”

Less surprising was how high the focus groups rated a nighttime photo of Monument Circle, a landmark since it was completed in 1901. Still, the focus group feedback has city officials rethinking what should be done with the Circle.

“We’re looking at the composition of tenants on the Circle, programming and possibly calming traffic and creating more space for meetings and gatherings,” Watson said.

Providing places for people to sit on the Circle, as well as closing one of the two lanes of traffic, could be key to enhancing the Circle as an attraction for residents and visitors.

A night photo of the Circle—which tested much better than day shots of the same landmark—is being used prominently in Visit Indy’s bid proposals for convention business as well as Power Point presentations made to meeting planners and in its current direct e-mail ad campaign.•