In the company directory, Steve Fugate shows up as CFO of Indianapolis-based Cargo Services Inc., a 20-year-old freight forwarder that provides import, export, warehousing, distribution and brokerage services to roughly 200 Midwestern and international customers moving everything from pharmaceuticals to animal feed. But his responsibilities go far beyond number crunching and book balancing.

“Not only am I CFO, but I’m also a third owner of the company,” Fugate said. “My duties expand far beyond the financial boundaries of our organization.” 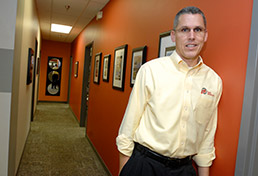 Civic Involvement: Cargo Services partners with the Indianapolis Colts as title sponsors of the statewide Books for Youth program. Fugate also serves as a sponsor of Poineer Bible Translators, Campus Crusade for Christ and Youth For Christ of Zionsville

Imagine a travel agent making arrangements to send a family from Indianapolis to Frankfurt, Germany. Now substitute “shipping container full of frozen chickens” for “family,” stir in issues such as time zones, language barriers, and currency exchange rates, and you get some idea as to the complexity of Cargo Services’ task.

The company was founded in 1992 by Will Batton (now director), John Rowe (now CEO) and Fugate. Fugate’s attention to the firm’s finances have helped it morph from a three-person shop to one with 30 employees and revenue of almost $30 million.

He oversaw development of the company’s 20,000-square-foot headquarters near Indianapolis International Airport, and developed the company’s financial reporting processes and systems. But all of that pales in comparison to the intricacies of maintaining customer relationships in 36 countries.

One thing he didn’t have to contend with is a precipitous, recession-triggered drop in business. The company’s portfolio is heavily diversified, meaning that a down cycle never hamstrings the entire client list. Though Fugate expects the U.S. economy to grow only slowly in 2013, he sees his firm doing well. “The manufacturing industry in Indiana continues to improve,” he said.

However 2012 did bring one major bump in the road. “We were notified that our health care premiums would increase by 132 percent effective in September and had to replace that coverage with a comparable plan in a span of only two weeks.”

One of his proudest achievements is negotiating a Books for Youth program with the Indianapolis Colts—an effort to get books into the hands of foster children. It’s all part of his effort to remain “people focused”—both by helping others, by making sure Cargo Services recruits and retains the best people it can find, and by keeping customers happy.•